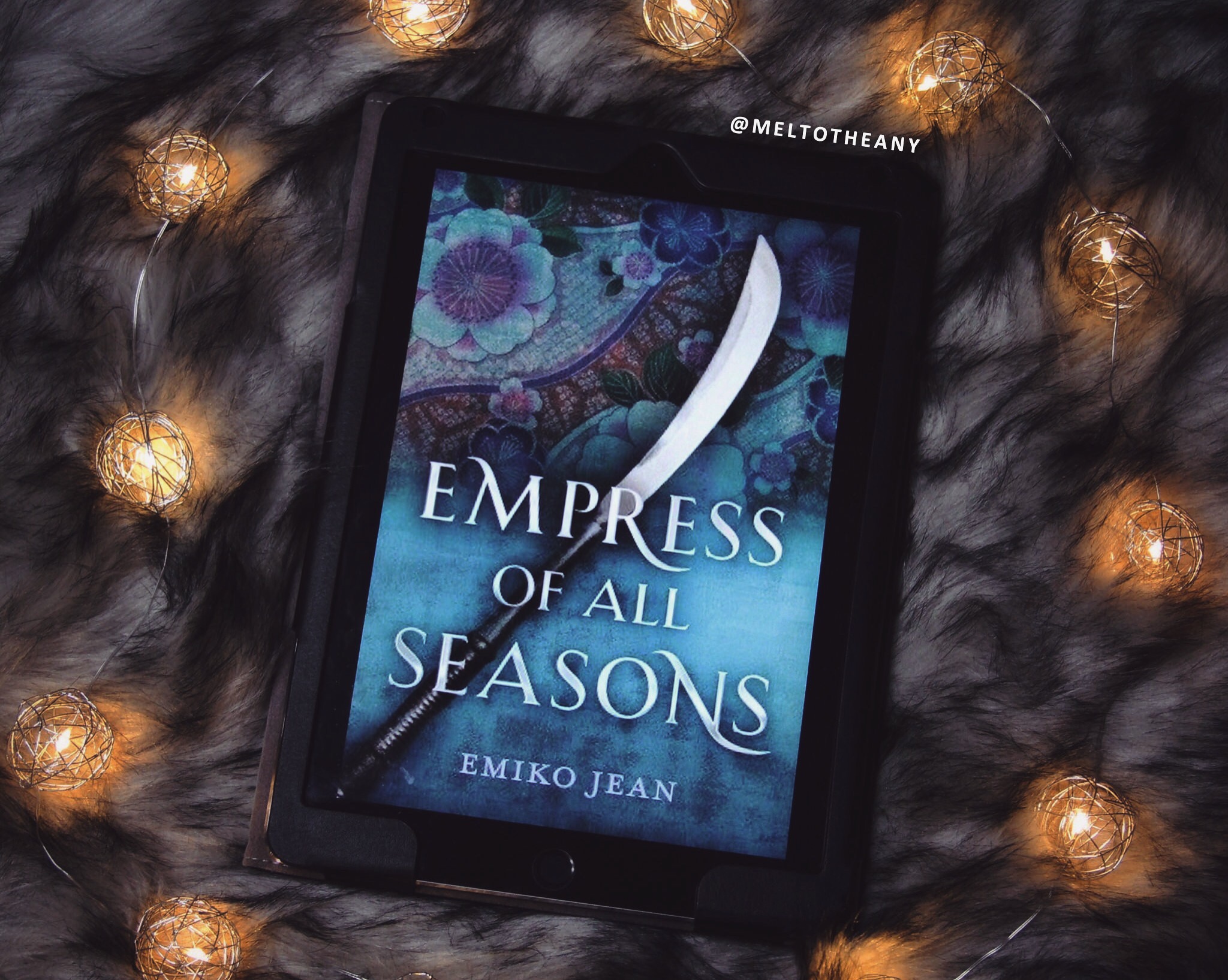 “Do not cling to the hand that holds you down”

Empress of All Seasons is an ownvoices Japanese fantasy that was a complete delight to read. I was completely immersed from the very first page, and the last page left me wanting the next book immediately. But this is a tale of family (both found and blood), and honor (both given and earned), and love (unconditionally and conditionally).

The emperor is a human who rules this world and is cruel and demands power in every aspect of his life. In this world, there are many kinds of yōkai, who can turn into different kinds of animals, phantoms, monsters, and demons, and the emperor enslaves all that he can find. The emperor also lives in a magical palace, where there are four rooms controlled by the High Priest, one for each season, that are also incredibly cruel.

And the emperor is looking to marry off his heir, and the only way for him to find a worthy empress is for her to win a competition that will make the girl prove she can survive these four magical rooms and to beat each season’s punishments. It is a little reminiscent of The Hunger Games and Red Rising, but each girl is required to get a limited number scroll, that will be found once they figure out a riddle, to move onto the next room.

“The rules were simple: Survive the Rooms. Conquer the Seasons. Win the prince.”

➽ Mari – Yōkai, whose mother, Tami, is the alpha of their Animal Wives clan. Mari has grown up surrounded by beautiful women whose mission is to go and seduce the richest of men in their animal form, and then on their wedding night steal everything that they can and bring it back to the village. And sometimes when they come back, they will also be pregnant from that night. If they deliver a boy child, it will be sent away, but if they deliver a girl child, then they will be able to retire and prepare their daughter for the way and life of Animal Wives. And even though Mari’s mother is the most beautiful and powerful of the clan, Mari didn’t inherit the looks or the powerful animal form of her mother. But Tami has prepared Mari to be powerful in another way; to be skilled in fighting and to maybe win a competition that will be the greatest heist of all the Animal Wives.

➽ Taro – The Cold Prince, and the Emperor in waiting, but his father, the current emperor, is terribly cruel while Taro is terribly smart. He accidentally invented and crafted metal collars that enslaves all of the yōkai that his father uses to control them.

➽ Akira – The Son of Nightmares. Half of his face is terribly scarred, and the other side perfectly beautiful. His father was a trader, but his mother is a ghost, and they were forced to flee and live in hiding after their village attacked them. He keeps all of Mari’s secrets, and helps save all the people that she defeats during her training, when she should be killing them. Also, he is so very silent and able to sneak around like no one else.

➽ Hanako – Weapons Master and love of my life. She is also leading the yōkai resistance. I want an entire book of her and her white ferret. Also, she is queer. I will say that this book maybe had the “bury your gays” trope, but you never get confirmation, but it for sure feels like it. So, please use caution, and I wish I didn’t have to keep writing this in reviews in 2018. Also, I really recommend you all check out Acqua’s review, because they go way more in depth with the heteronormativity in this world, and it really opened my eyes.

“We’ve been pushed around and forced into quiet rooms our whole lives. Nobody’s ever asked us what we wanted. The prize isn’t the prince. It’s the power.”

This was a really compelling story that I never wanted to put down. And I really think that Emiko Jean has created such a beautiful start to a story that I cannot wait to read more of. From the magic of the rooms, to seeing these four characters live the lives they have been dealt, to seeing this beautiful world turn into something so scary because of one man’s hate and oppression, I just loved it all so much.

I will say that this book for sure has major instalove and it didn’t feel organic or believable in the slightest. Also, Taro as a character easily won me over because of his softness at the beginning, but I really grew to find him unbelievable and just kind of dislike him and it made me sad, honestly. I also think this was supposed to feel like an angsty love triangle, but it never really felt like it. But Mari, Akira, and Hanako are still everything. Also, I can’t wait for more Hiro either!

Overall, I can’t wait to see what comes next. I thought it was beautifully written, and I was able to pull so many breathtaking quotes from the ARC copy I had. I loved so many of these characters. The story was unique and so very enthralling. And I loved the Japanese mythology and culture that was always at the forefront of this story. I completely recommend this story, and I truly think it is the start of something that is going to be amazing.

Buddy read with May at Forever and Everly, Lily at Sprinkles of Dreams, and Amy at A Court of Crowns and Quills! ❤

24 thoughts on “Empress of All Seasons by Emiko Jean”