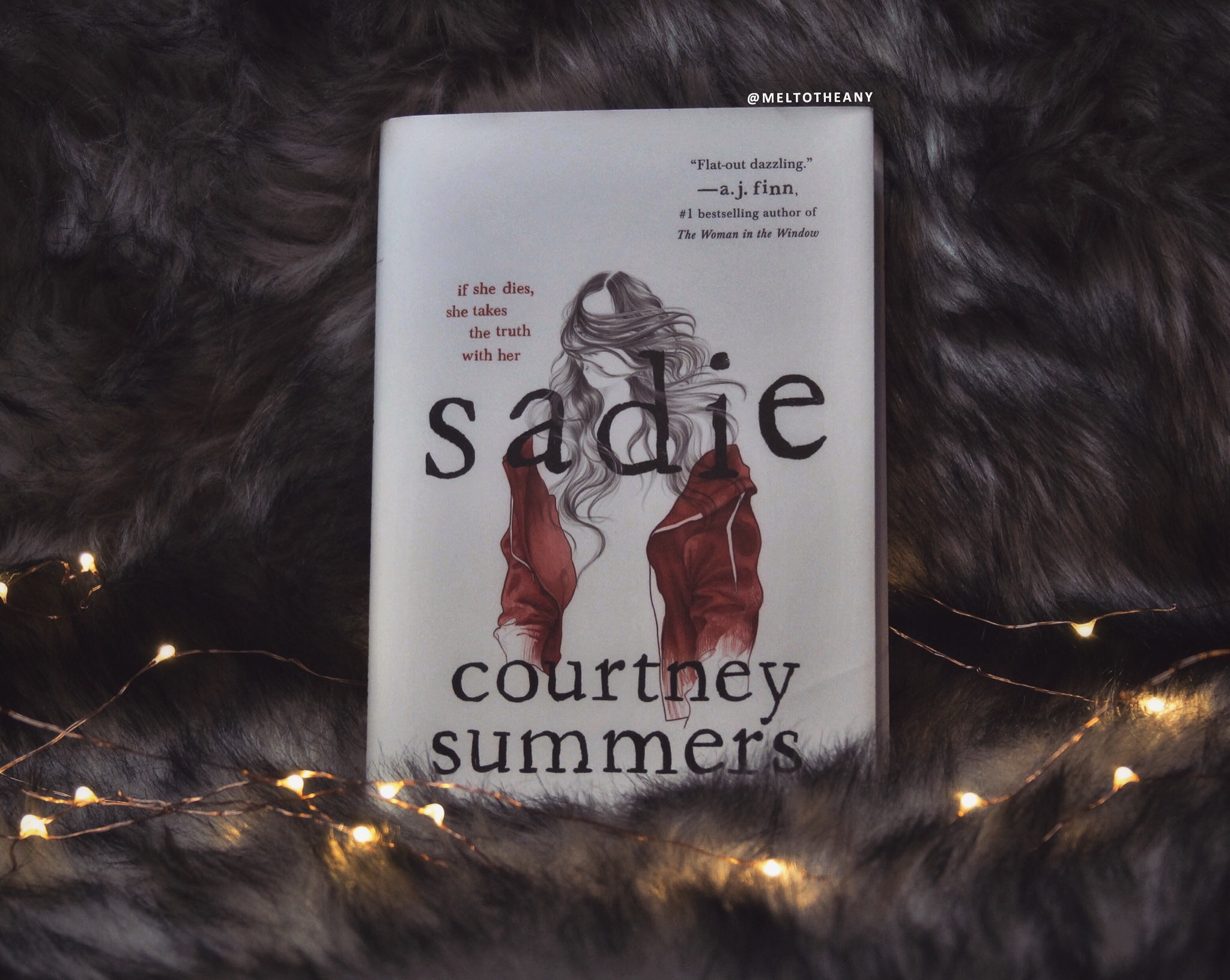 Sadie is worth all the praise and hype you’ve heard about it. I had a feeling I was going to love this book, but I didn’t know that I would give it a piece of my heart. This is such a bright light in 2018 releases, and even though it handles some really tough topics, I recommend it with my entire heart and soul. And I will never forget Sadie or her story, and I will never stop listening to, and I will never stop believing, the voices of girls who have their own stories to tell.

This story is told in alternating chapters between a podcast and Sadie. We follow nineteen-year-old Sadie who is on a mission to murder the person who she believes has murdered her thirteen-year-old sister. The podcast is about five months behind the steps of Sadie, but the two storylines come together so very beautifully. But again, this is a dark book and this review is going to talk about some of those elements, so please use caution. Content and trigger warnings for pedophilia, loss of a loved one, bullying, assault, sexual assault, murder, death, extreme parental abandonment and neglect, talk of suicide, drug use, and underage drinking.

We get bread crumb after bread crumb from Sadie, while she travels to get revenge for her sister, the only person she has ever loved in this world. And the story really is so expertly crafted with the podcast element. I will say that I did listen to this on audiobook because so many people recommend the story to be experienced that way, but I didn’t love it as much as most people. But then again, I do have a hard time with audiobooks. But I fell so in love with Sadie and her story, that I listened to this in one day and one sitting.

And I know a lot of people don’t love the ending, but I think it is one of the most powerful endings I’ve probably ever read in my entire life. Plus, I feel like the choice of the cover of Sadie is genius, because Sadie truly is a faceless girl. She is a girl like so many whose stories don’t get to end happily, a girl whose story rarely even gets to be heard, and when it does it isn’t believed.

Something that I think is a really easy concept, but is hard for so many people to understand, is that rapists and pedophiles can be kind, and successful, and funny, and pillars of their community, and it will still never take away from the fact that they are rapists and pedophiles. The other titles and attributes do not lessen the fact that someone is a rapist or a pedophile. And how we teach girls at a very young age that the crimes committed against their bodies, and against their wills, is something to feel shame over. And how we live inside a broken system where rapists can commit the same horrific crime over and over, because no one wants to listen or believe the victims, especially if they are poor and uneducated. And Courtney Summers really illustrates that point so very beautifully throughout Sadie. Because our own world proves every day that people would rather believe powerful men over loud girls. But Sadie takes action into her own hands, and reclaims her power, her body, and her heart, along with getting her vengeance. And it is one of the best journeys I’ve ever experienced.

“Sometimes I don’t know what I miss more; everything I’ve lost or everything I never had.”

I also want to talk a little bit about the representation in Sadie. First off, Sadie has a very severe stutter. I didn’t know this going in, and as a matter of fact I don’t think I’ve ever read a book where the main character has a stutter before, but it was perfection. Heartbreaking perfection though, because seeing Sadie unable to get the worlds out when she was feeling extreme anger or sadness was so heart wrenching. But Sadie always got the words out, and she always got her hurt across, and it was so beautifully done. Also, I know the scene is brief, but Sadie is so not straight, if anything she sounds rather pan to me. Lastly, Sadie has some of the most realistic poverty rep I’ve ever read, and I still feel like in 2018 that is something that is hard to find.

And I obviously think Sadie is a masterpiece of a story, and the themes are so important and relevant, but I think the biggest reason I loved this book so much was because I felt so connected to Sadie because of what she felt for Mattie. I will be completely honest with you all, I wouldn’t want to live in a world without my little brother. Me and my brother are a bit closer in age than Mattie and Sadie, and we were never abused or neglected, but the pure unconditional love that Sadie feels for Mattie, and how responsible and protective she felt, it was so pure and so realistic and just completely ripped out my heart and left me feeling so raw and vulnerable. I would do anything in the universe to protect my little brother, and I feel like I fell in love with this book just because Sadie’s love for her sister resonated so strongly in my very soul. There is a line in this book about Sadie feeling alive when her sister comes home from the hospital, and how she laid a hand on her baby sister’s chest and felt her breathing, and I was uncontrollably weeping while reading it. I don’t think I’ve ever seen the love I have for my brother depicted so closely than to that passage, and I know I will carry that inside my heart forever.

“I stood over her crib and listened to her breathing, watching the rise and fall of her tiny chest. I pressed my palm against it and felt myself through her. She was breathing, alive. And I was too.”

Overall, this book just really meant a lot to me. And even though this book is heartbreaking, it has some of the most beautiful quotes I’ve read all year. I read it with tears in my eyes for at least half, but I wouldn’t trade this reading experience for anything. And I am now going to read every single thing Courtney Summers has created. I truly loved this one, and I recommend it with my entire heart and soul, especially if you have a close sibling relationship, if you enjoy murder mystery podcasts, and if you also want to change the world so that more victims’ voices not only get heard but get believed.

Lastly, I want anyone who needs to hear it to know two things: First, if you need to talk to someone, RAINN is always there. They are completely confidential, and available 24/7. You can also call 800.656.HOPE at any time, too. Secondly, I believe you and your voice deserves to be heard and believed.

Buddy read with Ashwini at bookwormmuse! ❤

49 thoughts on “Sadie by Courtney Summers”