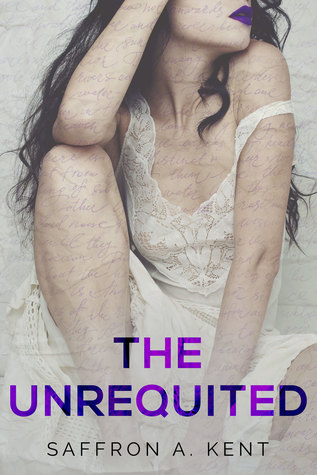 “It was beautiful and right. It was wrong and ugly, just like the earth beneath my feet. It was tragic and ecstatic. It was everything I’d hoped love could be.”

Okay, this book isn’t going to be for everyone and I completely get that. I will go into details below, but this book has grey area cheating and it is a student and teacher (college) relationship, but, good dear Lord, the sex in this was so fucking good. Like, maybe the best I’ve read all year. So, if you’re looking for something really naughty and really graphic, then look no further than The Unrequited.

Layla Robinson is all alone at college, living by herself in a dorm on campus that has construction going on below her top tower level. But Layla also feels alone and abandoned by her family, because she fell in love with her stepbrother, and only friend, and it really tore apart the family. Yet, Layla is still obsessed with him. But soon she will have a new obsession, and that is her poetry teacher that she keeps running into without him knowing. (Seriously, if you love the character Joe from You by Caroline Kepnes, then you are going to love Layla!) Also, Layla brings up pretty much every fucking Lana Del Rey song, but I’ll be honest, that’s what this book even reads like. She compares her professor to “Blue Jeans” and I swear to God, I feel like I could hear that song in the background while reading this entire story. Another thing is that the atmosphere of this book is perfect. Like, the snowy and winter setting was expertly done, and I really wasn’t expecting that going in. And it even enhances the Lana Del Rey vibes even more.

But, okay, on to the poetry professor. Thomas Abrams is a new dad, but he and his wife are having a lot of problems. Thomas thinks it is because he was ignoring her, to work on his poetry, but he is now willing to do anything to make his marriage work… I mean, besides not having sex with a student. But he has moved back to the college town they met in and has taken up a job at the college where he meets Layla, and he claims that he is doing everything to try to make his wife fall in love with him again. You know, again, besides putting his dick in other women.

But Thomas and Layla bond over their mutual knowledge about their unrequited love, and their unforgettable loneliness. Yet, they recognize their chemistry together also, and after teasing each other nonstop, they eventually start having explosive sex. And like I said above, the sex is honestly 11/10, some of the best I’ve ever read, but a lot of sus things are going on.

Layla has a lot of mental health issues, and is completely and utterly unstable, but her character was one that I really loved. Again, she and her actions are totally unpredictable, but I felt like her character was just really realistically done (besides the tattoo, what the fuck even was that?). I’m not justifying her actions, and totally understand that most of them weren’t even close to being “morally good” or whatever, but they were hella believable and made for such an enthralling tale. From her stalking, to her obsessing, to her even just liking the way Thomas says her name, I loved it all.

“Firecrackers burst over my skin at the way he said my name. As far as I’m concerned, my name is average, but his voice, the movements of his tongue against his lips, make it special.”

And even though all this wild stuff is going on in the background, the real reason I’m giving this three stars is because I didn’t really like the ending. I just feel like both Layla and Thomas completely changed who they were as characters. I almost feel like the author didn’t really know how to end this really taboo and naughty story she created, so she tried to give it a fluffy romance ending and it just didn’t work for me, because it was so different than the entire rest of the vibe of this book. Plus, let’s be real, the character of Hadley was handled really not great, especially with Thomas “forcing” her to be a mother. Not every woman is put on this planet to be a mom, and that’s okay, but I feel like Hadley (for the most part) was really shown in a negative light because of her mental illness and her wants for her own life, and I really disliked it.

“We shouldn’t look for love stories where there are none to be found.”

Overall, I wanted a really sexy book and The Unrequited delivered that and more. Also, for the record, I don’t think the sex in this book is going to be for everyone, but it was very much for me. But if you’re on the kinky side, and like dominant partners, you should totally give this a try. Seriously, this is one of my new favorite forbidden romances of all time. I never wanted to put this story down, and I’m totally going to check out more by Saffron A. Kent.

Content and trigger warnings for a BIG power imbalance because of a student and teacher relationship, cheating, depression, suicide attempt, talk of drinking and driving, talk of grey area consent in the past, stalking, peeping toms, underage drinking, and a lot of questionable mental health representation and discussion.

14 thoughts on “The Unrequited by Saffron A. Kent”