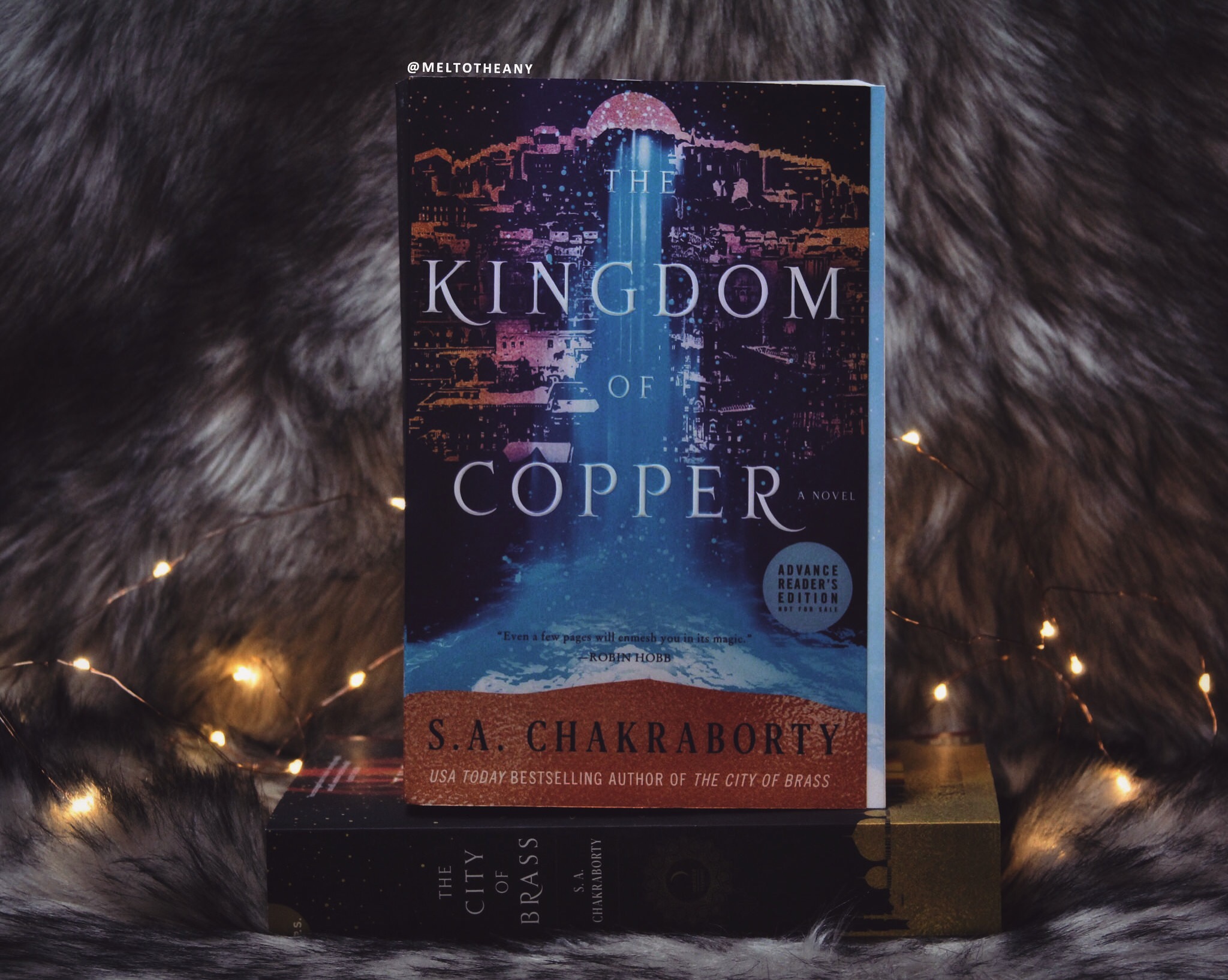 “It is time we get some vengeance for what they have done.”

Friends, this was such a phenomenal installment that was such a treat to read. This is an own voices Muslim Fantasy series, and a historical setting of the early 1800s, which barely touches upon the Ottoman Empire. And The Kingdom of Copper picks up five years after the events of The City of Brass

This is a story about djinn, and magical cities, and people being able to harness powers that they don’t fully understand. This is also a story about oppression, and privilege, and the terrible things people are willing to do in the name of pure blood. The mixed bloods in this world, shafits, are treated horribly and without a second thought. This book very much mirrors present day and the refugee crisis; people are unable to get food and shelter, while others are dying of things that could be easily healed, all because of fear, prejudices, and hatred.

Our three main characters are all very separated and all living very different lives than when we last saw them in the first installment. But they all have also grown tremendously during the five years, and now all have very different goals.

“A threat to a loved one is a more effective method of control than weeks of torture.”

➽ Nahri – gifted healer who is trapped in the royal court of Daevabad and trying to make the best out of an alliance that was forced upon her.

➽ Ali – djinn prince exiled by his father, constantly in fear for his life, while also trying to learn his new abilities.

➽ Dara – one of the best warriors, who is watching soldiers being rallied, who are willing to do terrible things in the name of peace.

“Everyone knew about Darayavahoush, Nahri. They just couldn’t agree if he was a monster or a hero.”

My biggest complaint about this second installment is how long it took for Dara and Nahri’s storylines to actually meet up. Obviously, I ship them pretty hard, so I was just really disappointed when it took forever for them to even interact with one another, especially with what Nahri believes. Also, as much as I love the queer side characters in this story, I’m not entirely sure how I liked how one of them was handled. Also, I very much thought Ali was going to give us some bisexual representation in this book, but it appears that we are just going to get a hetero love triangle, which makes me sad.

But this story was impossible to put down, because I was so enthralled on every page. I feel like this 600+ page book was just completely packed with action, and I never wanted it to end. I love S.A. Chakraborty’s writing, and I think she really expertly crafts three very different characters, with three very different perspectives, all of which I completely adored.

Overall, I really enjoyed this book, and the last line of this book will leave you utterly breathless. I have such high hopes for book three, and fully expect that it’s going to be a perfect conclusion with the way all the threads of this story leave off. This is such a beautiful Middle Eastern story, that ties in so much of the culture’s folklore in an absolutely beautiful and seamless way. I completely recommend this series with my whole heart.

Buddy read with Jocelyn at Yogi with a Book! ❤

15 thoughts on “The Kingdom of Copper (The Daevabad Trilogy, #2) by S.A. Chakraborty”