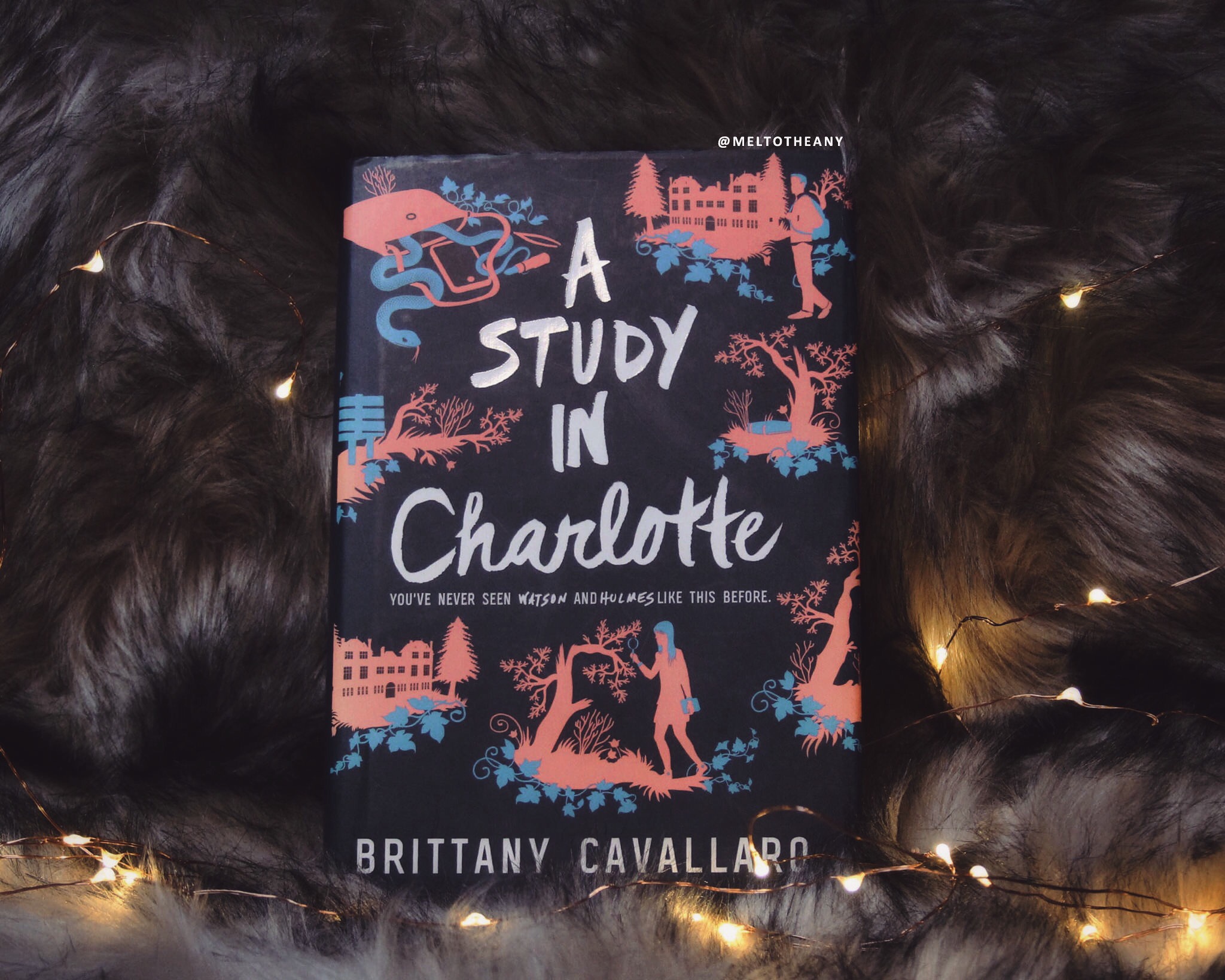 “I felt like I was being pulled through a dark, dank wardrobe into some boozy Narnia.”

This was the most unexpected treat! I thought that I might enjoy this one, but I never expected to fall completely head over heels for it, especially after reading A Study in Scarlet the night before starting this! This is a reimagining of Sherlock and Watson, but told in the perspective of their descendants, Charlotte and Jamie, in modern day! And, oh my gosh, this was just fantastic!

Jamie Watson recently left the UK to attend a Connecticut prep school because of a rugby scholarship, and he isn’t thrilled to be leaving his home away from his mother and to be closer to his father and his new family. Charlotte Holmes also attends this school, but she spends most of her days in her laboratory testing her genius and solving mysteries. And these two’s paths cross because (yeah, you probably guessed it) a recent murder that happened on campus. Oh, and they are both being framed for it!

“We weren’t Sherlock Holmes and John Watson. I was ok with that, I thought. We had things they didn’t, too. Like electricity, and refrigerators. And Mario Kart.”

But this book was for sure a lot darker than I was originally expecting. I mean, it obviously deals with murder mysteries, but it also deals heavily with drug addiction and sexual assault. And I just enjoyed how themes like rape and addiction were constantly at the forefront of the story, and how Charlotte is slowly reclaiming part of herself, while telling more and more of her truth. I just feel like themes like this need to be more normalized, especially in school settings, and I think it was really respectfully done, too.

I said this in my review for A Study in Scarlet, too, but with both stories I just think it is pure genius to tell the story in Watson’s perspective. And it really helps that Jamie Watson is the softest and sweetest boy in existence. But I just think seeing Charlotte through his eyes was so pure and just added something to the story that would have been impossible to achieve in any other way of telling the story. And just in general, this story is very character driven, and I easily fell in love with both of the stars, which was for sure something I wasn’t expecting going in.

“The two of us, we’re the best kind of disaster. Apples and oranges. Well, more like apples and machetes.”

Yet, the heart of this novel is for sure a murder mystery, and I was impressed by how much it kept me on my toes! I really didn’t see the twists coming, and the ending utterly surprised me. I truly loved it, and I thought it was expertly done. And I think Brittany Cavallaro really crafted something so smart and wove something so beautifully.

Overall, I really enjoyed this one! I am so excited to see how August Moriarty is going to come into play, especially with the title of book two being The Last of August! But I loved this reimagining, I loved these characters even more than who they are based off of, and I was completely enthralled with this dark story. I can’t wait for Jamie and Charlotte’s next adventure.

Content and trigger warnings for talk of suicide, talk of past sexual assault, talk of past rape, murder, a lot of talk about drug use, drug addiction, mild self harm (allowing glass to be pushed deeper in the skin), and drugging.

25 thoughts on “A Study in Charlotte (Charlotte Holmes, #1) by Brittany Cavallaro”