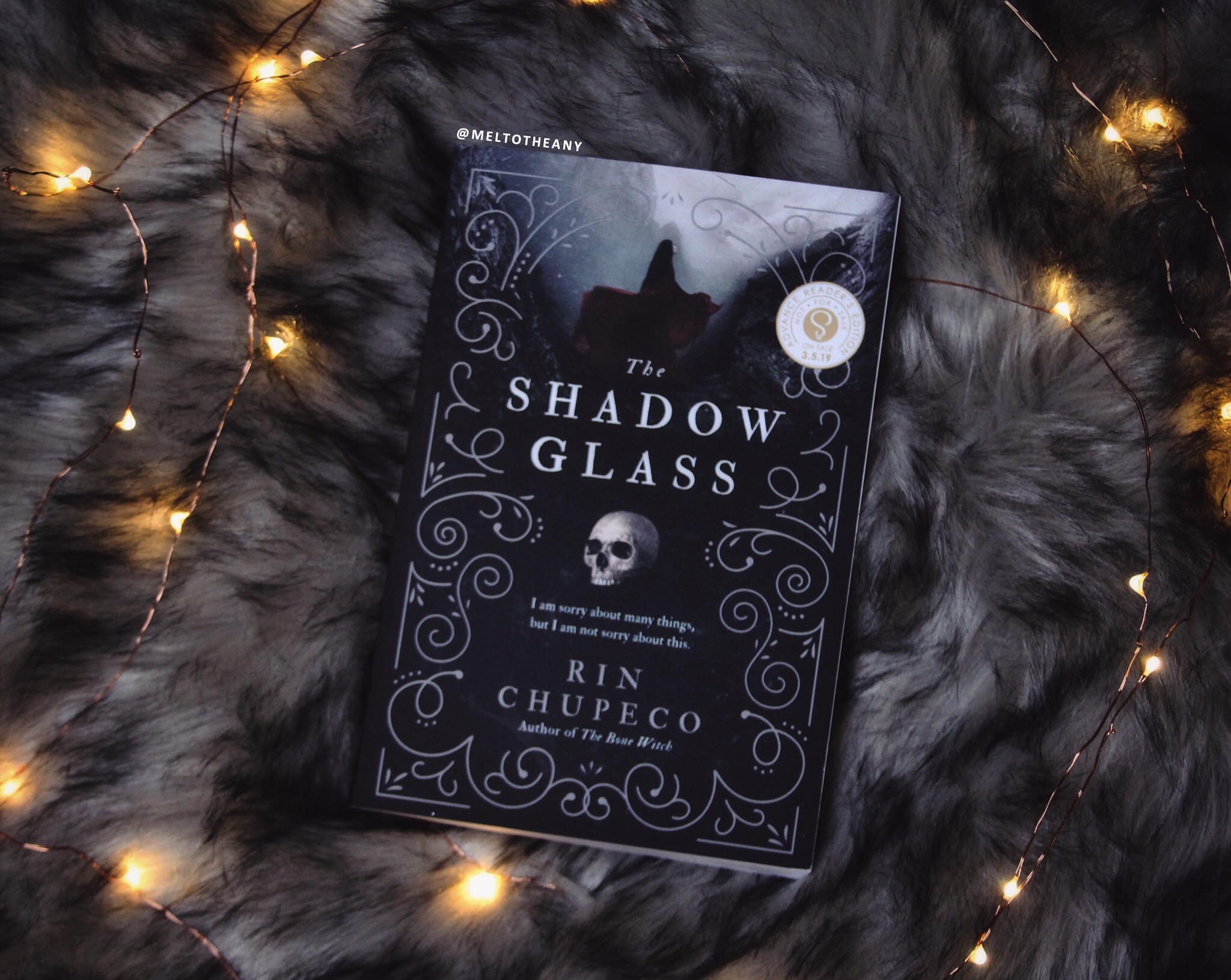 “There are worse things than black heartsglass, Tea. Silver is just as capable of hate.”

Most of you know this The Bone Witch trilogy is a series I hold very close to my heart, but I truly have been looking at this word document for the last twenty minutes completely unable to start this review. I’m not ready to say goodbye, and I’m equal parts in denial that it’s over, but in awe of how perfect Rin Chupeco closed this series out. I am so thankful for these books, and I will truly carry them with me forever.

The Shadow Glass is the concluding book in an ownvoices Asian inspired fantasy series, that stars a bone witch named Tea who has the power to resurrect and control things, which she finds out in The Bone Witch when she accidentally resurrects her brother at his funeral. From there, Tea and her newly risen brother, Fox, go on a journey for Tea to learn about her asha powers, but they quickly feel and realize the expectations that all eight kingdoms are going to put on her.

In this world, all the people wear heartsglass around their necks. Your heartsglass will change colors depending on what you’re feeling but will overall stay mostly the same color. Yet, silver means you draw runes and they are so very important and are so very sought after. Other ashas control elements; fire, earth, water, and wind. But Tea is a dark asha who can control death. Bone witches are not very respected in this world, even though their powers hold the most important job in this world; defeating Daeva, which are different demons who dwell in this world, who are resurrected every so often.

“The darkness was inside me, I think, long before I raised my brother from the dead. My silver heartsglass merely gave it a mouth, made the darkness realize that it too can hunger…”

This story is told in my favorite format ever, which is half of it being told in present day from a bard, where you see the ramifications of everything that has happened in the past, where Tea appears to be the villain, but the other half is the past, from Tea’s perspective, where we get to slowly see the events unfold to bring us up to date with current day. Two timelines brilliantly woven together to give us the most epic finale of all time and truly is a masterpiece.

I feel like I can’t say that much more of a synopsis, because this is the last book in a trilogy, but watching Tea grow, from this girl who was so unsure of her future and her new powers, to this woman who learned to love not only others, but also herself and this power that felt so uncontrollable, and it was an honor to read, truly. And seeing this new journey that Tea has to take for herself in The Shadow Glass was completely enthralling and such a treat to read.

“I knew that shadowglass spell; I had committed it to memory nearly two years ago, and it was now a mantra, buried so deep within my psyche that nothing could pull it loose. I had pored over those words for so long that sometimes they came easier to me than my own name.”

But I couldn’t write up this review and not talk about the romance and how it completely still leaves me weak in the knees. I would completely lay my life on the line for Tea and Kalen and they are honestly everything. Also, I am just such a sucker for the protector/bodyguard/personal-warrior element in romances, and I seriously will never stop swooning over them. Truly the stuff dream OTPs are made of.

I do want to take a minute and talk about the sexual and gender representation in this book! There is a side f/f romance, which you don’t get to see that much of in this installment, but I still love them with the sum of my being! But what I really want to talk about is Likh and her transition. In all three books, we see Likh discovering how fluid gender can be, yet also testing out the waters of new things because of the gender roles, and power imbalances, people place on so many things in the societies all these characters explore, but in this book she decides her pronouns and after that everyone instantly respects her pronouns and her transition and it’s truly beyond words beautiful.

Okay, so I feel like I should write up a little personal paragraph, even though I don’t want to take away anything from this masterpiece of a trilogy. Rin Chupeco pulls from many Asian inspirations, but as a biracial Filipino it just means the world to me to see a Filipino author not only writing books that are completely in my wheelhouse, but to really have it reflect so much of my culture. Then, I also get to see an Asian girl and her Asian brother be best friends and willing to sacrifice anything for one another, and if you’ve followed my reviews for a while, you will know my brother is my best friend in the entire world, and I would sacrifice anything for him, and I’m just weak and soft and it really means so much to me. But lastly, we really get to see Tea living during the good mental health days and living during some really terrible mental health days. Mental health and Tea’s guilt, grief, and trauma is never shied away from in this story, and to even see this in an Asian inspired fantasy story is enough for me to build a shrine to Rin right this instant.

And I don’t have an eloquent way to say it, this ending broke me. I read the last twenty-percent of this book with tears streaming down my face. So much perfection. Overall, this really is the book of my heart, and Tea is the character of my soul, and Rin Chupeco truly wrote a love letter for every girl out there who wants to change the broken world that people think is the default. If you haven’t started this series yet, please give it a try. I truly love it with my whole heart and soul, and I truly think it is so very worth your time.

Content and trigger warnings for violence, death, loss of a loved one, grief depiction, brief mention of past parental abuse, and war themes.

(Thank you so much FFBC, for letting me be a part of this tour!)