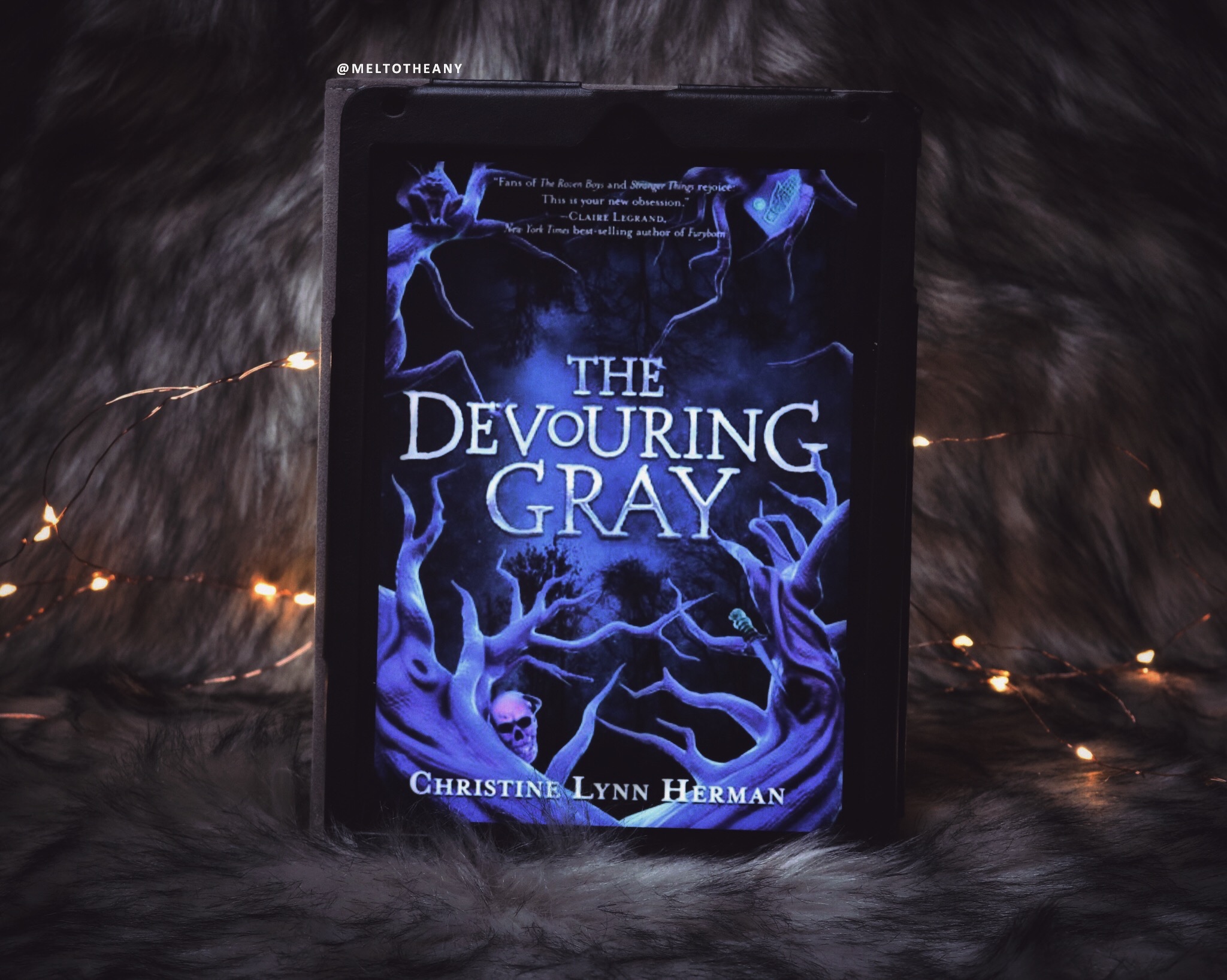 “Four Paths had its charms, if you could ignore the fact that it was also a monster prison she apparently had some ancestral obligation to deal with.”

This is a really hard review for me to write, because this book had some of my favorite things of all time; lyrical and beautiful writing that I could nonstop highlight, an atmosphere setting that gives me goosebumps even just thinking about, a mystery all surrounding what hides in the dark depths of the forest, and a very diverse cast of characters. Like, damn. But if this isn’t the first review of The Devouring Gray you’ve read, yes, all the Riverdale and Stranger Things comparisons are all valid. I kind of think The Raven Cycle one is a bit of stretch, but I can kind of see it. But this debut novel really impressed me, and I can’t wait to see what the author does next.

But The Devouring Gray follows four teens in upstate New York, all living in a little secluded town called Four Paths. And in this mysterious forest town, four families are held to a higher standard, because their descendants were the reason the town is protected from the Beast who hunts them. And all the descendants are able to harness the powers that should be passed down through their bloodline, but only if they survive a ritual pertaining to their ancestor. But now the town is under attack, and all hope is with four teens who are the descendants that are needed for survival, yet they might not be ready to provide protection for themselves, or anyone else, just yet.

“in eighteen forty-seven, a group of settlers seeking a new life in upstate New York decided to end their pilgrimage here. On this day, we celebrate the leaders of that group—Thomas Carlisle, Lydia Saunders, Richard Sullivan, and Hetty Hawthorne.”

➽ Harper Carlisle – Missing one arm from the elbow down after her ritual to harness her powers went wrong, and holding a grudge over someone who used to be her best friend but wanted nothing to do with her after her accident. Also, her father is a predominant figure in the safety of the town. Also, also, a warrior babe who can wield many weapons.

➽ Violet Saunders – Bisexual, just moving to Four Paths after the death of her sister and trying to learn to live with an astronomical amount of grief, while also learning that she has a hidden bloodline she never knew about. Also, piano playing goddess.

➽ Isaac Sullivan – Bisexual, living on his own after the rest of his family died in an accident. He is also Justin’s best friend, a broody reader babe, and he has the best and most scary power of them all. Also, he was easily my favorite character.

➽ Justin Hawthorne – The popular boy, who has the most powerful family in town, even though he feels like he must always do what his mother (also the sheriff of the town) wants, even though he is keeping a very big secret from her. Side note, I would die for his sister, May, my tarot card reading baby.

“Powers or not, he was still a Hawthorne. He would find a way to keep Four Paths safe.”

Yet, even though these are the four main characters, we have so many side characters, too! And this, in addition to the fact that the story jumps points of view a lot, I just feel like I never truly cared about any of the characters, even though I didn’t have a problem with any of them. I mean, it really is a strange feeling, because I can mentally break down that these are the four main characters, but while reading the chapter switching just makes me feel like I’m reading ASOIAF or something else that feels like we are given so many different points of view. I feel like this was the biggest factor that kept me from loving this book; I never truly got to know any of these characters because of the way the story jumps around.

Also, if I’m being honest the Beast and the Gray felt too much like Stranger Things to me, but also with not enough explanation. I obviously am here for a good mystery, but I think seeing more of this parallel world, the mysterious creature and its powers, would have really benefited the story by filling in some much-needed gaps and made the situation feel scarier and more high-risk. Like, I was honestly convinced that some type of humans or other beings were going to reside in this world! Or we were going to fully understand the powers and what this thing was capable and not capable of! I don’t know, the concept is just so amazing, but I felt really let down by the biggest risk factor of the story.

“Something inside Violet had cracked the day Rosie died. There was an abscess in her chest, a gaping hole in the back of her skull. A place for evil things to slip right in.”

Overall, I really loved the ownvoices queer rep, and the atmosphere and setting were truly nothing short of amazing. I do want to mention that the main relationships in this are not f/f, but there are lots of hints at side f/f relationships! Also, even though I could never truly connect with the story, I still think there is so much good here. And I think many readers will still really enjoy this one upon release. But that epilogue ending made me audibly gasp that made my cat give me angry eyes for waking her! Is this the start of a series? Because I am totally down with reading whatever Christine Lynn Herman comes up with next, but especially with this setting as a backdrop.

Content and trigger warnings for loss of a loved one, a lot of talk of death, murder, grief and trauma depictions, violence, abandonment, talk of rituals and self-sacrifice, and assault.

15 thoughts on “The Devouring Gray by Christine Lynn Herman”