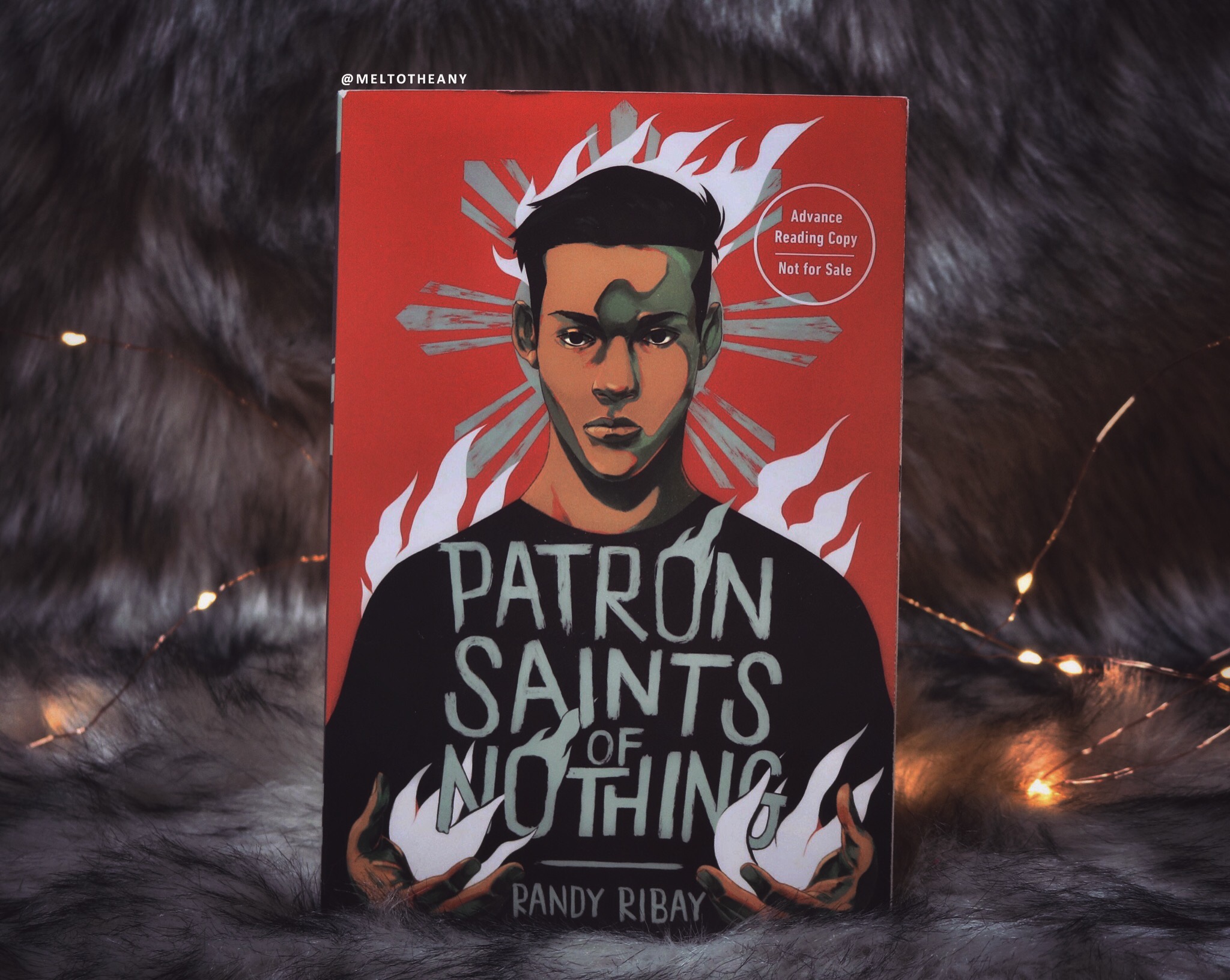 My best friends got me an ARC of this and I love them more than I have words to express! (Thank you so much, Madalyn, Chelsea, & Jane!)

This was one of my most anticipated releases of 2019, and even though I didn’t love it the way that I truly thought I would, I still am going to boost it forever and always because there are a lot of good and important things in these pages, and a lot of things that Americans (and other people not living in the Philippines) need to be educated on.

I don’t want to make my review about me, but just a little information in case you do not follow me or my reviews; I am Fil-Am, and biracial (white and Filipino) just like the star of this book. I also was raised in Michigan and was accepted into The University of Michigan like the star of this book. My father was born in America, but my grandparents did immigrate here from the Philippines as adults. My family are for sure, without question, “Americanized” but I still grew up embracing my Filipino culture and being proud of it. Also, all of my grandma’s family is still living in the Philippines, and she visits them frequently, sometimes alone and sometimes with us.

Regardless, I just wanted to say all of these things to help you realize how much I was anticipating this book. Also, that my heart breaks daily over the war on drugs and the blood that President Rodrigo Duterte and his policies have spilled. Most Americans are not aware of the death toll (or the hidden numbers) that is because police and even regular citizens are allowed and encouraged to kill civilians who are said to be using and selling drugs. From public executions to make examples of people, to children dying and being labeled carriers, to more innocents dying but having drugs planted on them after their death, I don’t even have words for how sick I feel just even typing this paragraph. And so many families are left with heartbreak from loss and not knowing what has happened to their loved ones. And the fear that speaking out can literally cost them their lives.

“So the drug war continues. The body count rises.”

Patron Saints of Nothing follows a boy named Jay, who was born in the Philippines to a Filipino father and American mother, but his family moved to The United States under the pretense of having a better life for their children. Yet, when Jay lived in the Philippines, he was very close with his cousin, Jun, and they have kept up writing letters back and forth to one another their entire lives, even though Jay hasn’t responded in a little while. Heartbreakingly, at the start of this book Jay finds out from his parents that Jun has been killed because of the war on drugs.

Jay cannot for an instant believe that Jun would ever use or sell narcotics, and after a mysterious Instagram message, he asks his parents if they would be willing to allow him to go back to the Philippines to reconnect with Jun’s family after his death. And his parents agree and send him out so he can travel between a few family member’s homes, and that he can reconnect with half of his culture that he has been neglecting. But once Jay arrives in the Philippines, he realizes that there is a lot more to Jun’s death than what meets the eye, and he feels an immense need to get to the bottom of his death and what really happened.

Okay, so I love this premise more than words. And I really did love seeing things through Jay’s eyes and how he felt like he was completely missing out on a culture that he has been away from for so long. From being very aware of his lighter skin, to having a hard time picking up Tagalog, to realizing how fucking privileged US citizens are and getting called out on it; this book has a lot of good and a lot of important themes, and I truly wish I could put it in every American’s hands.

But, sadly, a lot of things I just really didn’t like. And again, everything I’m about to say, please take it with a grain of salt. Closer to release, I plan on boosting so many of my beautiful Filipino reviewing friends’ voices, because their voices are what matter. They not only have to live under Duterte, they will know an authentic Filipino living experience way better than me and any trip I could take with my family, or any whitewashed news article I can read.

I just really disliked how Jun’s storyline, and all the tips and clues Jay was following, ended. And just in general, I really think we should emphasize how just because someone sells drugs or is a drug user, they are still worthy of life and shouldn’t be killed. I mean, yes, it is terrible that children and innocents are dying every single day over this drug war, but it is also awful that people using drugs are dying, too. Sometimes I truly felt like this book, and Jay’s actions, felt very middle grade and very surface level, and we never went past the surface and truly got to see and talk about the horrible things that are taking place. And I’m not saying it is ANY Filipino’s job to educate people on the war on drugs or anything about their culture, but I just feel like had the opportunity to really go there, especially based on the book’s premise, and I was left a little unsatisfied.

Next, I really hated the little romance in this book. Like, I’m never going to be here for grey area cheating in general. But I’m really not going to be here for a seventeen-year-old and nineteen-year-old either. Like, I get that it is legal in a lot of places, and I get that it is only two years, but I just don’t like it and it makes me feel skeezy while reading. Especially with Jay admitting she is part of the reason he makes the choice he does at the end of the book.

And, even though this book is supposed to be set in present day, I feel like a lot of the video game references were really dated. And even though this is such a minor element of the book, it is brought up so many times throughout this novel. And each time I kind of was side-eyeing. No one would refer to Sylvanas as the Queen of the Forsaken, especially not in 2019. I mean, do teenagers really still play World of Warcraft? And acting like people have physical video game collections in 2019, when everything is digital? I don’t know, it just really pulled me out of the story at every mention.

Overall, I am just a little bit disappointed. I still think this is an important read. And I still think seeing a biracial American get in touch with a culture he has felt very out of touch with is really important. And I’m always going to be here for it, truly. I would also die for Jay’s titas right this very second. There is also another mention of a f/f relationship in this book too, and I’m always here for seeing positive sexuality representation in life, but especially in the Philippines. And again, I’m feeling really bad already about writing this review, so I hope you respect my feelings, but I also hope you remember that I am very white passing Filipino who has never actually lived in the Philippines and I haven’t been to the Philippines since Duterte’s election. But if you are a Filipino reviewer, I would be honored to boost your review for this if you link it below!

Trigger and content warnings for loss of a loved one, talk of animal death, talk of drugs and addiction, police brutality, talk of human trafficking, grey area/emotional cheating, and assault.

12 thoughts on “Patron Saints of Nothing by Randy Ribay”