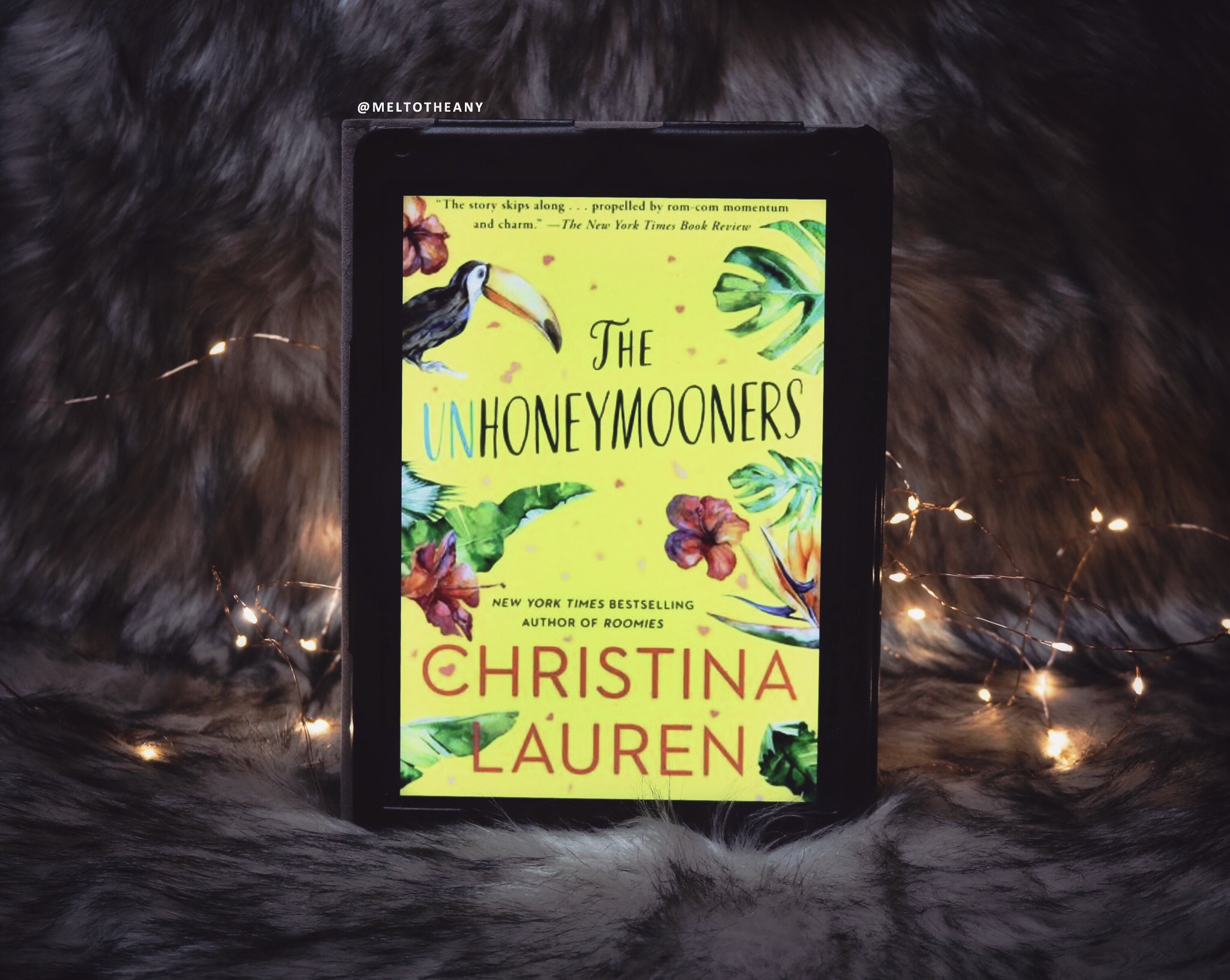 ARC provided by Gallery Books in exchange for an honest review.

“That’s the point of luck: it happens when and where it happens.”

This is my favorite Christina Lauren book since Roomies! I’ll be honest, I wasn’t too in love with Josh and Hazel’s Guide to Not Dating or My Favorite Half-Night Stand, but this felt like the famous duo was back and resecured that special place in my swoon-worthy romance heart. This was so funny, this was so heartwarming, and since I’m leaving in a few weeks for Hawaii, the setting was pretty perfect for me, too! This is a hate to love, enemies to lovers, fake dating romance that features two characters who are forced to be around each other because their siblings are marrying each other.

➽ Olive Torres – Biracial (white and Mexican), twin of the bride, has been unlucky her entire life.

➽ Ethan Thomas – Brother of the groom, and Olive’s archnemesis.

“I want to say something sassy, but the only coherent thought that comes to mind is how insulting it is that eyelashes like his were wasted on Satan’s Errand Boy, so I just give a perfunctory nod and turn down the hall.”

And these two had a very rocky, and very confusing, first meeting. But they are trying their best to put their differences aside for this wedding, even if they are antagonizing each other every single chance they get. But the wedding takes an unexpected turn when everyone gets sick from the seafood buffet that was served, except for Olive and Ethan, since neither of them ate from it.

Their siblings insist that they take their Hawaii honeymoon, instead of letting the trip go to waste! And they both decide to, because once they get to Maui, they won’t have to see each other except for sleeping. That is, until Olive’s boss and Ethan’s ex fiancé happen to be at the same resort, and they are forced to play the part of happy newlyweds, because Olive doesn’t want to get caught using their sibling’s honeymoon by the resort and be forced to pay for it out of their own pocket, and Ethan doesn’t want his ex to see him single. And honestly? It was just the perfect fake dating setup, let’s be real.

“The problem with lying about relationships is that humans are fickle, fickle creatures.”

And I truly believe the banter in this book is the best that these authors have ever crafted. It’s smart, witty, and truly hilarious. I also just loved Olive and Ethan as characters so much, and I easily shipped them together; maybe harder than any Christina Lauren characters. The setting was perfect, the plot was genius, and this was just an overall really easy book to escape into and love.

But I am very curious to see how plus-sized reviewers are going to feel about the representation in this book. This is not my lane, so please know that while reading this paragraph, but this book puts a huge emphasis on how Olive thinks Ethan fat-shamed and body-shamed her. She constantly talks about her body, her curves, her stress baking and eating, and how things look on her body, and even tears clothing that’s too small for her, while always kind of comparing herself to her thin twin sister. Like, I was 100% sure Olive was plus-sized through the entire start of this book, but then, once they arrive in Hawaii, it seems like the only big and curvy thing about her is her breasts, which are obviously perfect! And then, at the end of this book it starts feeling like she and her thin sister are identical in bodies, too, and she also gets compared to Selena Gomez. Like, I just didn’t understand. It was like they wanted to have a plus-sized main character, but they didn’t want to actually go there or hire any beta readers. Like, again, this isn’t my lane, and I’m obviously not saying that thin people can’t have body dysmorphia or just have unhealthy relationships with food and their bodies, but the way this read personally felt bad to me. I just honestly think this book could be really triggering because of the emphasis it has on Oliva’s relationship with food and her inner monologue about her thoughts about her body, while also painting a very hazy picture of her actual body.

Also, there is a very small conversation between Olive’s family members questioning if a family member is queer, and… it was really badly done. “Because lesbians use those strap-on things” and apparently have short haircuts. And I completely understand it was supposed to be funny because older generations “don’t get it” or whatever, but it wasn’t cute; it was offensive and poorly done. And the mom saying she wishes she was born a lesbian, like… gag me with any spoon you can find. Like, it was so minuscule, and I have no idea why it was even part of the book or why editors thought it was a good thing to keep included, but it just made me side eye and put a bad taste in my mouth.

Okay, I know those last two paragraphs seem bad, and they are, I’m not making light of them whatsoever! But I will say that if you took those two elements out, this is a really good book. Like, the best I’ve read from Christina Lauren in years. It was laugh out loud funny, it was romantic and swoon worthy, and I really shipped this enemies to lovers dynamic. I never wanted to leave Olive, Ethan, or Hawaii, and I think this is just going to be the ultimate beach read of 2019.

Content and trigger warnings for talk of cheating (not the main characters), A LOT of talk about food and bodies that I think could be potentially triggering, and the brief but questionable conversation about sexuality that I mentioned above.

9 thoughts on “The Unhoneymooners by Christina Lauren”