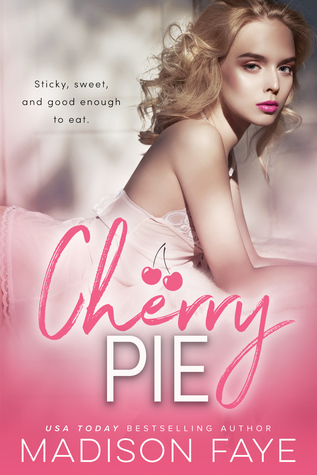 “I kept bidding in the ensuing online silent auction, until for a million dollars, she, and her innocence, were mine.”

*Cues Def Leppard Warrant* Friends, I know, I know. Look, I just wanted something smutty, fun, and quick, and Cherry Pie for sure delivered on all fronts. I did enjoy the sex scenes, I just sadly didn’t love the plot, and I especially didn’t love the ending, but If you are looking for something fast and sexy, I still recommend this.

This is a story all about a girl named Kendall who has found herself in dire need of money, to pay for her upcoming freshman year of college, and she is presented with the option of selling her virginity online, during a silent auction for an underground sex club in LA. Her face will not be pictured, but her body will be on display, which means her new cherry tattoo is also able to be viewed.

Marshall lives a very luxurious life, that he has built for himself from the ground up, while also being the only parent in his daughter’s life. He appears to be on the straight and narrow path, but he indulges in the underground sex club, where he stumbles upon the silent auction and decides that he has to bid on this anonymous woman’s virginity.

This is a taboo, age-gap romance, involving a forty-two-year-old man and an eighteen-year-old girl… and she just happens to be his daughter’s best friend. See, I was really invested with this premise, but once I found out that guy had known the girl since she was five, because they were neighbors, that’s when I started getting really uninvested. I am never here for grooming-feeling stories, and every time that aspect of their relationship was brought up, I just hated it.

But the sex itself, even if highly unrealistic of someone’s first time, was really enjoyable. Sometimes, Marshall would continue to use the adjective “little” and it was bothersome, but besides that, I did enjoy all the sex scenes in this book very much. It was the plot, more specially the portion with the daughter/best friend, that was really unbelievable, which is really saying something when this is a 200-page story about a girl selling her virginity online.

I think this book really would have benefited from just having steamy sex, but the author tried to have a concrete story so desperately, and it really didn’t fit this book. Also, it got into instalove territory, which was also upsetting. I wish that sometimes authors could just give us some amazing sex scenes and stories, without having to make everything about everlasting love.

But again, I think you kind of know what you’re getting into when buying a book like this, and it totally served its purpose and I am happy I picked it up. Also, I would totally be down trying more from this author in the future. But please let me know if you have read and enjoyed anything else by them!

Content and Trigger Warnings for abandonment and use of language like “little girl” and things that like that, that could totally make the reader (myself very much included) uncomfortable.

I read this for #smutathon, which is being hosted by Lainey and Riley! ❤