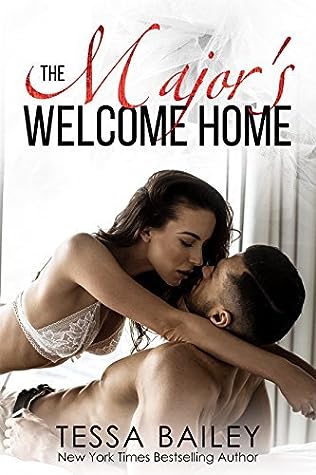 It breaks my heart to say this, but this was easily my least favorite Tessa Bailey story so far! I will say that I don’t really like military love interests, or love interests that are as possessive as the one in this story, and I especially don’t like it when they like to be called daddy. Full disclosure and all that; my dad is a Marine and I just can’t, friends, I just can’t. So, I think many people will enjoy this story more than I did, but I really need to just stop trying to make military romances work for me.

➽ Beck – Army Major Mastermind, who is currently dealing with the loss of a friend, and is finally back on US soil after many years away, and plans to stay back home.

➽ Kenna – Daughter of a Lieutenant General, who has put the fear of God into any Army soldier who would touch his daughter, but he has asked her to pick up Beck from the airport. And after she makes some gross jokes about how he probably likes videogames; she realizes that he’s a total hottie and she would be honored to make him a sandwich and maybe welcome him home any way he would like.

You all see where this is going. Beck doesn’t realize who Kenna’s family is right away, but once he does, he is already head over heels for her. And he hasn’t thought of the woman who wrote him a dear john letter a year ago, who he thought he would spend the rest of his life with. Oh, also, Beck is a virgin and has never done anything sexual with anyone before.

I will say that I did like that the guy in this story was a virgin, and I really liked it at the start when he would desperately beg for any contact, but I didn’t love the sex scenes in this book. Now, this might be again because of what I said in the first paragraph with military guys, and daddy kinks, but I also just thought that Beck was too possessive. Don’t get me wrong, I like a good possessive lover, but he was too much, even for my submissive ass. Also, he is very southern and, if you’ve watched a certain booktube video of mine, I don’t really like cow-people/farmers/southern gentlemen/whatever love interests either, and Beck is very much that.

Plus, the sex locations and positions in this were kind of questionable, too. Again, you do whatever is safe and makes you feel good, but her just like going to town while he was walking around the gym? Baby, what are you doing? And right after messing around in a pool? Girl, no. And did you all clean up the gym/therapy equipment after you were humping away? Probably not. Yikes. Also, his first time on an armchair? I don’t know, and I’m not here to ever sex shame, but some questionable choices were made, that’s all I’m saying. Especially when so many other of Tessa’s books have 11/10 sex scenes (and positions and locations) in them!

But we get to see both characters realize that things that happened to them in the past were not their fault, and that they are both deserving of happiness. Sometimes life can just be cruel, whether that means shitty parents, or shitty heartbreak over losing someone you love. And I really did like the dynamic of him being the innocent one, while she was a “bad girl” at the start of this book.

Overall, this one just didn’t work for me. Basically, I would 100% smash Kenna, and 100% pass on Beck, so it left me in a weird reading headspace. Especially when this story started to really take a stereotypical alpha male “omg, I must give you my seed and have all the babies” turn. Again, it makes me sad, because I love Tessa Bailey’s other stuff so much! But this one just really missed the mark for me in so many different ways.

Content and Trigger Warnings: talk of loss of a loved one, talk of war themes, use of the slur g*psy, talk of heart attacks, and abandonment.

I read this for SummerAThon! ❤

2 thoughts on “The Major’s Welcome Home by Tessa Bailey”