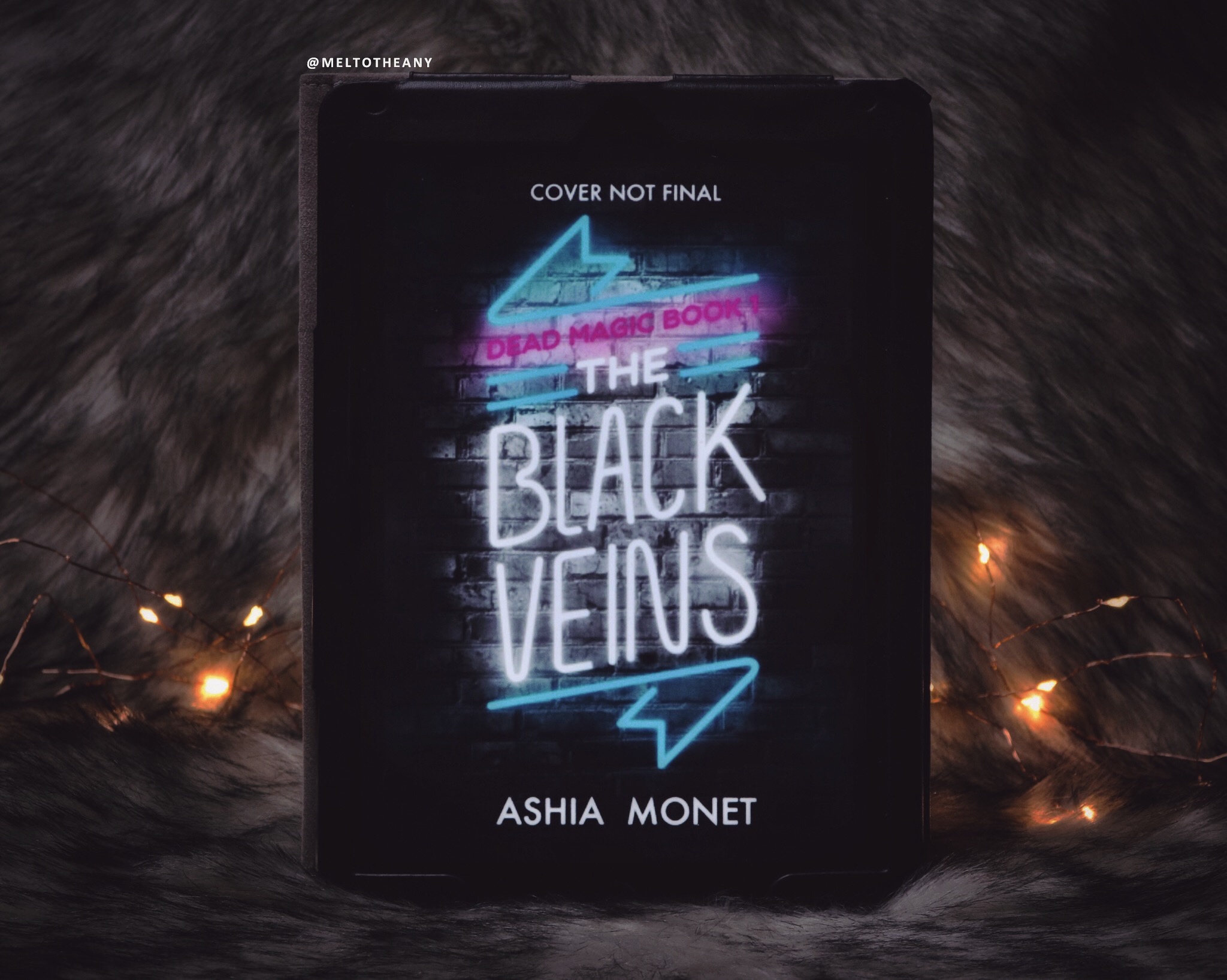 ARC provided by the blog tour in exchange for an honest review.

“The magic wakes at midnight. It arrives in the form of a song.”

The Black Veins is a YA debut that you are not going to want to miss. This story is set in an alternate version of our world, where a young girl and her family have planted secure roots to protect themselves, their home, and their magic. They run a magical coffee shop that only other magic wielders can see, because if you speak about magic to Common people, the Erasers will come and… erase you. You will never be heard from again, and they are always watching. But the world seems relatively safe.

That is, until one night when Blythe, our main character, is dreaming about a voice in her head, one that is also trying to get her to do something that she does not want to do. Blythe has always known that she was destined to do great things with her magic, even if she doesn’t harness that magic yet. But after her family is attacked and kidnapped, she is forced to get any and all help that she can.

And in this world, there are two magical governments, and a war is beginning:

➽ Black Veins – Old government, who rules the majority, and they have a city called Frost Glade which is supposed to be the safest city of them all, where the Sages’ castle sits.

➽ Trident Republic – New government, the rebels, and they only have one city: Electric City.

And there are seven types of magic that magicians can harness. Yet, when Blythe and six others were little, their families ensured that they would do great things with their magic, but setting them on the path to one day be the Seven Guardians:

➽ Blythe – Ether Guardian. Black, bisexual, and willing to do anything to get her family back.

➽ Cordelia – Mind Guardian. Chinese, great at hacking and coding, and has always worked extremely too hard at being perfect.

➽ Daniel – Nature Guardian. Very sheltered, because his parents have kept him exclusively on their property for most of his life. Oh, and something may be following him.

➽ Antonio – Animal Guardian. Puerto Rican, queer, and the sweetest cinnamon roll and bright light. Oh, and he has wings!

➽ Storm – Time Guardian. Black, and has a secret mission of her own and she is always on rollerblades. And she was probably my favorite character besides Blythe.

➽ Caspian – Death Guardian. Trans, asexual, and who has many secrets and much more story to be told.

➽ Katia – Lead Imperial Advisor for the Sages, and she is supposed to locate and transport all seven kids to Frost Glade safely, even if they would rather go to Electric City.

And Blythe feels like if she can get this group together, she just might stand a chance at being able to rescue her family from this rebelling government. And we are whisked away on the adventure alongside her, where she will travel all over the country via the Tempore, which is a magical forest that folds time and space and can teleport you quickly around the world, but it is temporarily shut down and a huge risk to use.

I promise you that you will fall in love with ALL of these characters. And I truly think that it’s a testament to Ashia Monet’s talent and craft that they were able to evoke so much emotion and empathy from me over every single one of their characters.

This is obviously a very inclusive story, and it is ownvoices for the Black, queer, and nonbinary rep. There is a side character who you meet (and will also fall in love with) named Jamie, who is Black, nonbinary, and adopted. This book truly just has so much good in it, I wish I could put it into so many hands, and it was nothing short of a joy to read.

I really do think that the heart of this first installment is family, both blood and found, and the things one is willing to do to protect that family. There is no stronger force in this universe than unconditional love, and Blythe proves that from the first to the last page. Throughout the entire novel Blythe proves that her family is her world, but we also get to see this ragtag group somehow also find room inside her heart.

Yet, I also think this is a story about being brave, and how bravery can take so many shapes and forms. Sometimes the only way to feel like you’re brave is to try your best, sometimes it’s to feel safe, sometimes its to not let anyone in, and sometimes it’s to magically travel across the country to recuse your family. There is no right way to be brave and I really loved seeing all these teens truly be some of the bravest characters I’ve ever read.

“Once upon a time, a young girl lost her family and discovered a new one.”

Overall, I just loved this. I loved the story, being on a magical road-trip adventure was everything, I loved the characters, and was rooting so hard for Blythe and her hockey stick, I loved the twists and turns that occurred throughout, I loved the magic system and how it was complex but familiar at the same time, and I obviously loved how inclusionary this book was, too. Oh, and I’m biased, and I loved spending a little time in Vegas as well. But I just recommend this story with my whole heart and soul, and I really hope you all will give it a try, because it truly is such a magical debut and a bright shining star in 2019 releases.

✨ Thank you so much CW @ The Quiet Pond for putting together this blog tour. I was so very honored to be a part of it and to help celebrate this beautiful story.

✨ BONUS: Ashia is doing a really cool thread on Twitter, where they are breaking down the characters way better than I did, letting you know their astrological signs, and they are also showing off some breathtaking art, too! I really recommend checking it out!