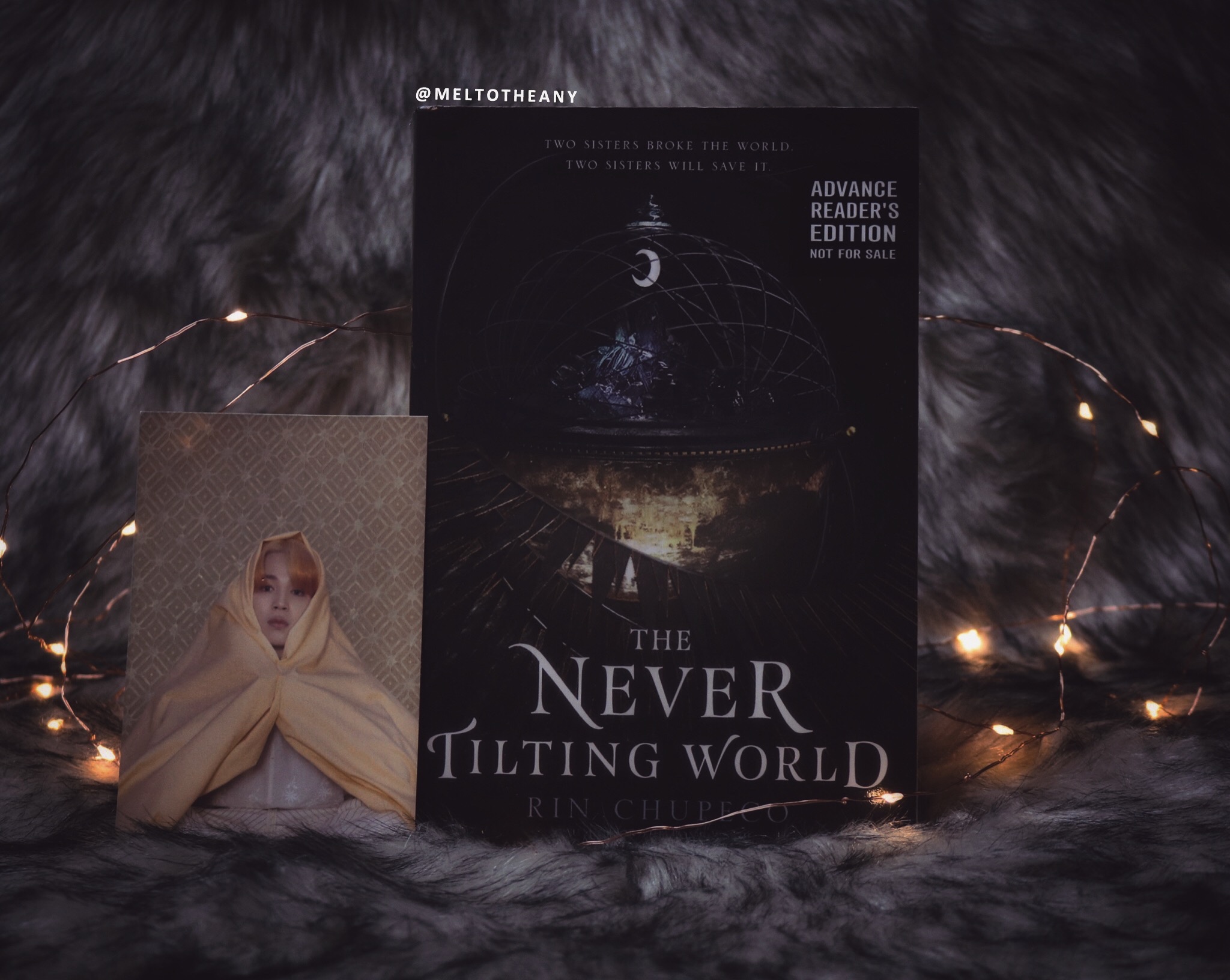 ARC gifted to me by Olivia! Thank you!

“When the dead find words, the goddess and the Devoted son will meet atop a fish not a fish, on a sea not a sea. It is she who travels to the endless Abyss, and it is he who guides her.”

It’s no secret that Rin Chuepco is one of my favorite authors of all time. I have supported and loved every book I’ve picked up by them, but I was still apprehensive how they were going to top The Bone Witch Trilogy, which is one of my favorite series of all time, but friends, The Never Tilting World might be my new favorite Rin Chupeco book. And this was such a perfect start to this duology.

This book was originally pitched to me as Mad Max meets Frozen, and even though that sounds like the wildest of comparisons, it totally is true. The world of Aeon is separated into two cities after “the breaking”. Two goddesses have raised these two girls, while keeping secrets and never allowing them to know that they are twins and that their sibling is alive. Yet, monsters are breaching both shores

Two Powerful Girls:
➽ Haidee – Has a love for mechanical engineering and is expected to marry soon.
➽ Odessa – Lesbian, chronically ill, and I will protect at all costs.

Honestly, Lan is probably my favorite character and seeing their journey to love and heal was really so beautiful that it makes me cry just thinking about it. Truly one of the best fictional characters I’ve had the pleasure to read about in a really long while. Rin also always gives their readers the best romances, and this book was no different. I was in love with both romantic subplots in this book, but Lan and Odessa’s f/f relationship meant everything to me (who is surprised?). Also, Rin confirmed they are Gryffindor and Slytherin and *chef kiss* you all know that’s the best pairing. But Haidee and Arjun are the best Hufflepuff and Ravenclaw m/f to probably ever exist, too.

But both of these two pairings go off on separate journeys, trying to uncover secrets that have been hidden from them their whole lives, while also willing to do anything to save their people.

This book is for sure a metaphor for how the time is truly ticking until our own world becomes uninhabitable, while we all live in opposite ends of the spectrum of constant day and night. There are monsters in this book, but the most terrifying aspect is the waters rising too fast and the ice coming in too quickly, which threaten to erase an entire city. While another city cannot provide for their people because nothing will grow, therefore they have to be sealed away hoping to gain more time before everything dies. Rin also always celebrates the Filipino culture in all of their books with all their themes. Also, I always view all of Rin’s characters as Asian, unless stated otherwise.

“We’re chasing a dying sea under an endless sun that kills us with a thousand little cuts every day. There’ll be nothing left soon. Nothing but sand and bone.”

This story also is truly a love letter to womanhood, motherhood, and sisterhood, and how those powerful bonds can scare men. The feminist undertone is constant in this story, and the parallels to our world is also impossible to not see. Again, the world doesn’t deserve Rin Chupeco and their stories, and please protect them at all costs.

“A demoness is what they call a goddess that men cannot control.”

I will say that I know this magic system, world, and world building isn’t going to be for everyone. Just like Rin’s other works, people are going to say that it is too complex and the learning curve is too steep, and that’s valid. I will be the first to say that I always just feel instantly connected to Rin’s work and their stories, but I know that is not the case for everyone, so here is your warning.

But overall, this was really just the perfect book from me. From the goddesses, to the deities, to the themes, to the Filipino culture blended in beautifully and seamlessly it was all just perfect for me and everything I look for in literature.

Buddy read with Alexa! ❤ (This buddy read meant so very much to me and I just really love Alexa so much and I’m so thankful for her friendship and her voice!)

And thank you so much Shealea for putting this amazing blog tour together! (You’re the best, bb!) ❤

Rin Chupeco has written obscure manuals for complicated computer programs, talked people out of their money at event shows, and done many other terrible things. She now writes about ghosts and fantastic worlds but is still sometimes mistaken for a revenant. She is the author of The Girl from the Well, its sequel, The Suffering, and the Bone Witch trilogy.

Despite an unsettling resemblance to Japanese revenants, Rin always maintains her sense of hummus. Born and raised in Manila, Philippines, she keeps four pets: a dog, two birds, and a husband. Dances like the neighbors are watching.