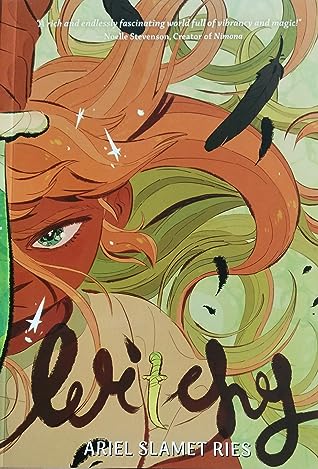 This was such a pleasant surprise! Witchy is a graphic novel story that centers on a witch kingdom called Hyalin! In this magical kingdom, the witch’s powers are dependent on how long their hair is, and they take a lot of pride in that. But if your hair is too long, and you are too powerful, the witch government can burn you to death. Also, the government tests the magical abilities of the young adults, and they can get conscripted into the military guard to protect the lands, which is also viewed as a great honor!

But our main character, Nyneve, not only is forced to hide her extremely long hair, but they also are very untrusting of the ruler Jung, and the other ruling witches, because she witnessed her father getting burned because he was so powerful. But now that the conscription is going to take place at her school, she is feeling very scared and a little helpless. That is, until she does something that will change her fate forever and cuts her hair off!

This first installment is all about the conscription “tournament”, the ramifications of Nyneve’s actions, new journeys to find out the truth of this kingdom and world, and a very cute talking raven named Banana! This story is also pretty diverse with very many characters of color (I feel like they are mostly south and south east Asian), a trans side character (I feel like this entire world is very gender fluid, but this side character is confirmed), and with a vast range of different body types! I also think the color palette is very unique, and very much captivated me throughout!

Content and Trigger Warnings for loss of a parent, transphobia (challenged), medical examination difficultly, and abandonment.

But I really enjoyed this story and I can’t wait to see what comes next! I truly always love a good magical story about people choosing their own destiny, even if the path to figuring that out can be a little difficult at times! And starring Asian witches, created by an ownvoices creator? Be still, my Filipino heart. And with most of my graphic works reviews, I like to do mini break downs of each chapter/issue so it will be an easier recap for me when a new installment is created! (Also, I just really like breaking down things!) But use caution for spoilers if you do not want to know anything about this story before going in!

➽ Chapter One:
We get to find out mostly what happened to Neve’s father, we get to learn a little bit about this military guard the is forced to protect this witch kingdom, and we start to see that dictatorship can wear many masks!

➽ Chapter Two:
Batu and Prill are Nyneve’s two friends, and both have my heart. Well, Prill was a little bit of an enemy, I think! But only for like a page. We learn about the conscription and find out it is in two weeks!

➽ Chapter Three:
This chapter really makes you fall in love with Neve’s mom. We learn that she joined the guard because of a bet. And she proves that she is willing to do anything for her daughter, and sacrifice anything for her safety. We also get to see the conscription, and Jung separates the kids into different teams, where they are forced to compete. And we learn who gets recruited! (I’m sure you can see where this is going… hehe!)

➽ Chapter Four:
Nyneve is exploring a new place, with a talking raven, and meets a whole new community that is run by Batu’s sister, Io! (Let me also say, that I, too, would have a crush on Io!) But we get to see this orphanage for kids whose parents have been burned, and we get to see that maybe they are going to grow up to be a resistance army. Oh, also, we get to see Nyneve and Banana studying in a library filled with banned books and I just really enjoyed it and it made my heart happy! We also get to meet a very mysterious tree person named Eynag! And we get to see Neve decide what she is going to do next, when everything feels so unsure.

Again, I loved this. I really have even higher hopes for the next installment! I might go on the website I linked above and read the next two chapters because I just want more and more from this world. The creator has truly blown me away and I just want to support them forever. I hope you all enjoy this one too, if you choose to pick it up!