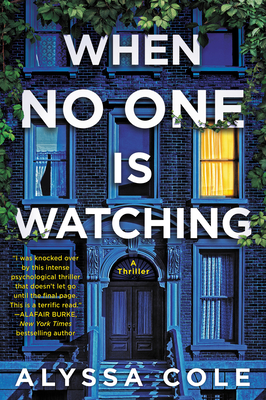 ARC provided by the publisher via Edelweiss
Publication: September 1st, 2020 by William Morrow

✨ Reviews you should check out: Bee’s, Jazmen’s, Carole’s

I have adored everything Alyssa Cole has written, so when I heard about this new mystery thriller I knew it would make my most anticipated releases of the year list! I enjoyed this immensely and I hope people read this and fall in love with this thriller, but I hope they also realize how deeply rooted racism and systems built on racism are still thriving because of racism.

When No One Is Watching switches back and forth between Sydney and Theo’s POV. Sydney is Black, recently divorced, and recently moved back to NY to help her mother who is ill. They have a brownstone in Brooklyn and the neighborhood and the neighbors mean a lot to her. Theo is white and recently moved into Sydney’s neighborhood and is currently living with his abusive ex-girlfriend while they try to renovate this home Sydney is trying to put together a more extensive compilation of the Black history from her neighborhood so she can do a tour, and Theo volunteers to help her. Meanwhile, more and more Black people in the community are going missing, and more and more white people are moving in acting as if they have always owned the neighborhood.

It is never a Black authors job to educate you, but Alyssa Cole truly and unapologetically talks about the privilege that white and non BIPOCs have. From gentrification and the many systems that are stealing land, and buildings, and lives still in 2020, to police brutality and who they are willing to protect and who they are willing take everything from, to the vast different microaggressions they are forced to endure every single day. This book does not shy away from anything, and I hope it makes a lot of people uncomfortable, and I hope they sit in that uncomfortably and begin to check their privileges.

This book has a lot of scary parts, but the scariest part of all is how this country really is still running on racism and slavery, just a different (more well hidden) kind of racism and slavery. From prison systems, to the police forces, to huge corporations and all their different investments. It’s not even well hidden, people just don’t want to see, because they don’t want to be uncomfortable, and they don’t want to change a system that is working in their favor too. But friendly reminder that you can’t be compliant with racism and racist systems and not be racist.

Overall, I really loved 80% of this book, but the ending was way too rushed for me. I just felt a bit unsatisfied with how a few storylines and character’s stories went (and I wanted to know so much more)! But I still think this was such a powerful read, and a shining star in 2020 literature. Alyssa Cole is a gift to this world (and all the genres) and I hope you all pick this one up!

Trigger and Content Warnings: gentrification, racism, so many microaggressions, talk of slavery, loss of a loved one, a lot of talk of financial debt, (medical) debt harassment, depression, anxiety, panic attacks, talk of cheating in the past (not the main characters), talk of domestic abuse in the past, themes of abuse and cycles of abuse, talk of institutionalization, murder, attempted abduction, brief mention of animal abuse, brief mention of suicide, forced medical experimentation, talk of drug addiction, threats of calling ICE and the police, and police brutality.