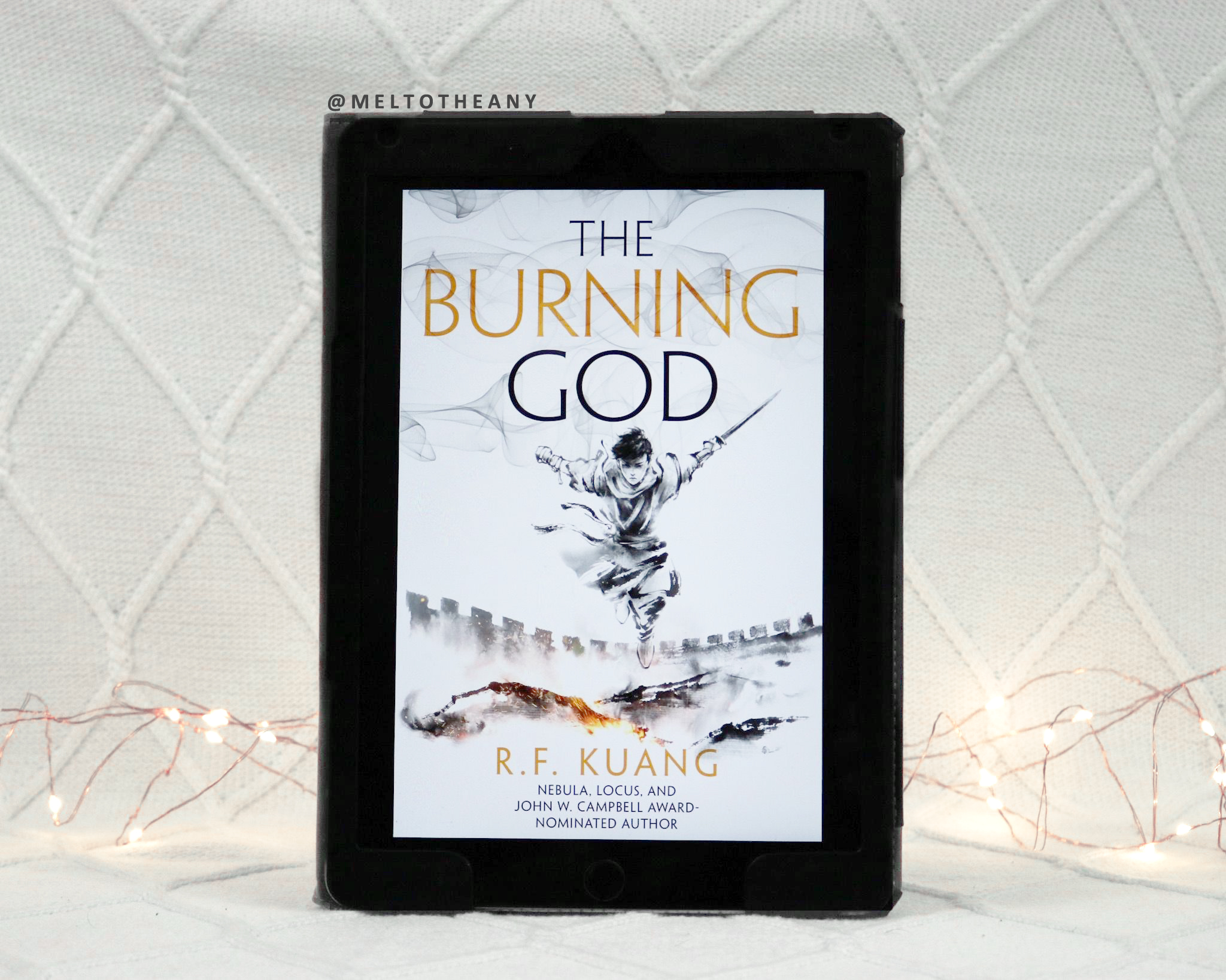 “Rin had spent so long hating how she felt when she burned, hating her fire and her god. Not anymore.”

The Poppy War trilogy is truly once in a lifetime and this conclusion was honestly a work of art all itself. This series is a military epic fantasy that is ownvoices and inspired from the authors family history and the stories she learned from them. Heavy themes of war, colonization, racism, colorism, genocide, cycles of abuse, and so many different types of trauma are never shied away from. I’ve read and reviewed many books these last six years of my life, and I’m not sure a series has impacted me more than this one. Every sentence has meaning, every chapter is so well planned, every event conveys layers and layers of thoughts and feelings. History is truly created by the victors mostly with the most blood on their hands, and the stories that get told are mostly through a white and colonized lens. R.F. Kuang has done so much with these three books and they mean so much to so many Asian readers.

Okay, okay, let me try to give you a review now! Also, please check out my dear friend Petrik’s review, because he is the reason I requested an ARC of The Poppy War back in early 2018. He is also a Chinese reviewer and his voice means a lot to me! Next, this review is going to be spoiler free for The Burning God, but not for The Poppy War or The Dragon Republic! Please use caution reading this review if you have not read the previous two installments in this series! 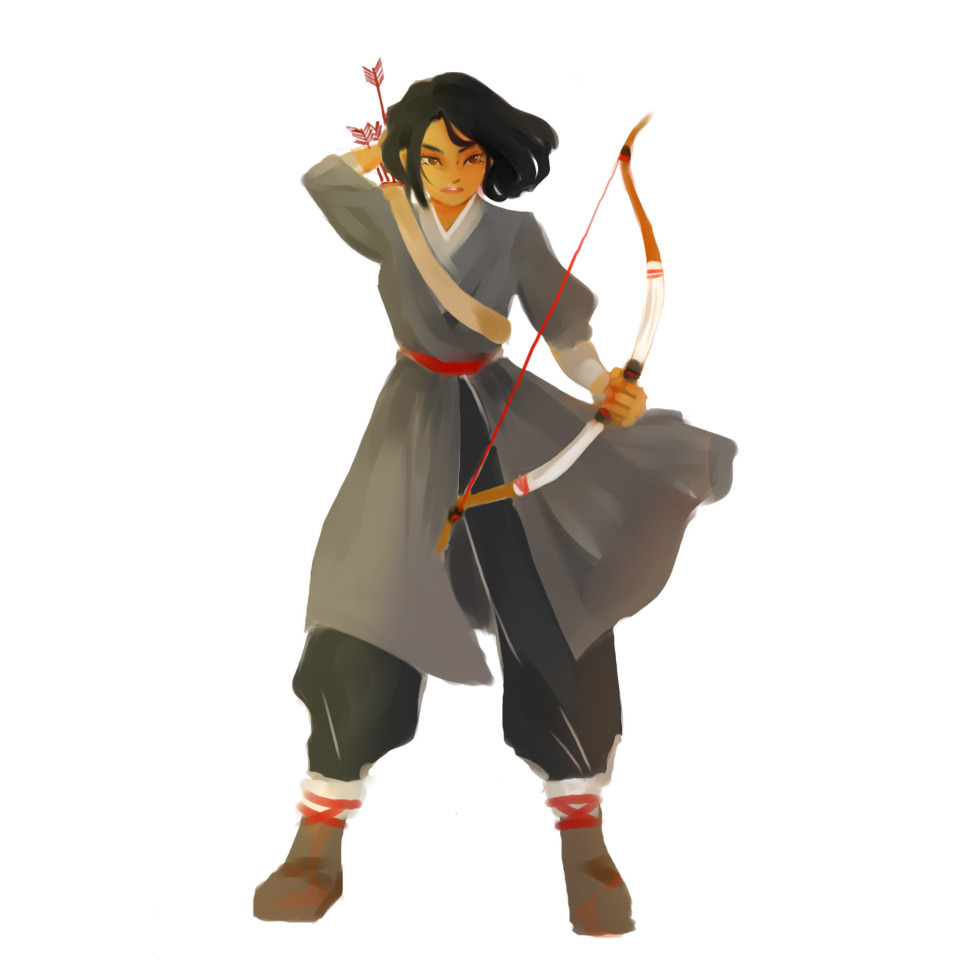 (beautiful art of Rin by merijae!)

“She was capable of such cruelties, even without the Phoenix’s power, and that both delighted and scared her.”

Rin and Kitay have had everything in their world turned upside down again at the start of this book, but they are both desperate to reclaim a country that has been taken from them repeatedly. They’ve also both been playing for the winning side for so long, they soon learn that tactics and strategy feel vastly different when you are now the underdogs. Rin has only known destruction for so long, but now she gets to know what it feels like to be a liberator instead of only a tool because of her god.

We really get to see many different sides of shamanism in this book, and I adored that aspect with my whole heart. I feel like I really can’t say a lot here, but the trifecta and the additions were amazing. I will say my only complaint for this book comes from the trifecta, but I still couldn’t get enough of all of the different types of shamanism in this book! Especially with a few new characters who easily made me feel very many emotions while this story progressed!

Speaking of different types of gods, I will say with utmost confidence that The Burning God has the best fight scenes I have ever read. Like, ever, in my whole life. Rin and Nezha just… the imagery, the banter, the emotions, their complicated actions, everything is another tier. Like, the pouring rain and the breathing of fire alone had me burning and drowning in the very same moment. Utter perfection in every combat scene and it was some of the most beautiful words I’ve ever seen strung together. Truly one of my favorite parts of this book, and not to lessen any of the important themes and values, but I don’t think I knew yearning until I read Nezha and Rin on different sides of a war neither want. The buildup of every encounter, every battle, every conversation, I was truly quaking.

“Hate was its own kind of fire and if you had nothing else, it kept you warm.”

This book very much centers around trauma and the many different cycles and forms. We get to see so many different kinds of trauma from physical, sexual, and emotional abuse, but we also get to constantly see the trauma from xenophobia and the impact of racism and colonization. We also get to see the way that many different characters within the book attempt to heal, live, and cope with their different traumas. And even though it is very heartbreaking, it’s very real, and very honest, and very important. I feel like The Burning God especially puts an emphasis on how abuse and trauma can be more easily hidden because of love, duty, and maybe even vengeance, too.

“You don’t fix hurts by pretending they never happened. You treat them like infected wounds. You dig deep with a burning knife and gouge out the rotten flesh and then, maybe, you have a chance to heal.”

And Rin’s trauma is so deep. She always remembers what it felt like the be a war orphan who was looked down upon from the very start. She knows what it feels like to be considered a lesser student because of her skin color and because of where she is from. She is haunted by the betrayal she has endured by the people who she thought she loved. She will never forget all the things she has seen and the price of war. She is realizing all the shit she has been forced to internalize because of the environments she has had to survive in. Rin harness her hate and anger and desire for revenge and keeps it close to her at all times in this book.

“They want to erase us. It’s their divine mandate. They want to make us better, to improve us, by turning us into a mirror of themselves.”

I feel like I could write an entire review on the colonization in this book alone. The reader gets to see the threat of this more and more in each book, but when Rin visits “New City” for the first time, it was harrowing in every sense of the word. Yes, this book is about a horrible and terrible civil war, but the Hesperians are the greatest evil of this whole book. How the Hesperians took over this city, took over the name, took over the foundation, took over the imports and exports, took over the military, all the while trying to convince everyone that it’s for the greater good, that it’s the right and better way, that it’s the only way. This might be the Filipino coming out extra hard, but white people love to colonize everything, but especially the people of the land they try to take, while always reminding them they are and never will be truly equal to them. All of the scenes that truly disturbed me were with the Hesperians, and they so horrifically depicted what has happened to so many countries over and over again, and what is still going on unapologetically in 2020. I could feel Rin’s helplessness with everything I am, and I hope people really process who the villain of this story truly is. Magical gods disguised as dragons, power hungry men, and internalized racism are terrifying, but there aren’t words for people trying to rip the identity of your culture from you.

“There are never any new stories, just old ones told again and again as this universe moves through its cycles of civilization and crumbles into despair.”

This book also emphasizes how the victors get to decide how the history is written. They get to create their own villains, their own heroes, their own story. History books are written by the same colonizers who are still trying to take absolutely everything and make it westernized, hence the fact most people (myself included) were not educated on what was going on in China pre WWII, and what happened when Japan marched on Nanjing.

“When you conquered as a totally and completely as he had, you could alter the course of everything. You could determine the stories that people told about you for generations.”

I’ve had so many people in my DMs on goodreads and on insta asking about my feelings on how this last book concluded, and I never really know how to answer it, but the answer is heartbreaking perfection. I honestly cannot think of a better conclusion, yet I do think that it won’t be for everyone. But as the events in The Burning God unfold, it becomes more and more clear. And I really do think it is a perfect parallel(s) to how things in our world felt then and how they very much still feel now. Also, war is unspeakably hard, but when you’ve lived your life for battle after battle, trying to live after a war is over can be just as hard, just in a different kind of way.

Overall, I’m going to be really honest. I cried while writing this review, and I’m very teary eyed right now with my final thoughts. This series just means so much to Asian readers and reviewers. It was such an honor to read these books, to feel haunted but seen by these themes, to fall in love with Fang Runin over and over again. What a blessing it was to see all three of these characters, walk alongside them, see them change and grow, because of their environments, because of expectations, and because of their damn selves. I truly don’t have the words. From Sinegard, to every battlefield, to the very end. I am rendered speechless. Not only do I think Rebecca is going to redefine so many parts of the book world with her writing (both with this trilogy and all her other endeavors to come), but I think she will inspire and help pave the way for so many Asian authors to come. She truly ended this trilogy perfectly, I’m just not ready to say goodbye, but I am so eternally honored for this series existence, and I truly will sing it’s praises forever.

Trigger and Content Warnings: animal abuse, animal sacrifice, animal death, colonization, dark torture, dark murder, death, racism, genocide, colorism, sexism, assault, talk of rape, talk of sex trafficking, talk of being buried alive that I feel could be claustrophobia inducing, talk of suicide, abuse, talk of abuse in past, PTSD depiction, grief depiction, so many traumas depicted very hauntingly, talk of drug addiction, drug use, drugging against people’s wills, bombings, self-harm, forced captivity (also claustrophobia inducing, I feel), panic attacks, blood depiction, talk of genital mutilation (to people who committed bad acts), cannibalism, talk of kidnapping in the past, talk of a graveyard devoted to children, mention of miscarriages and abortions, mention of shock therapies, mention of unwanted medical experimentation, starvation and famine, and just overall very dark war themes. This book does not shy away from all aspects of war, and can be extremely hard to read at times, please use caution and make sure you’re in the right headspace! (Please credit me if you copy paste these trigger warnings! It takes a lot of time, energy, and labor for me to try my best to help ensure the people who read my reviews have the safest reading experience possible! You just read a review (and book) about colonization, don’t steal an Asian reviewer’s work! Thank you!)