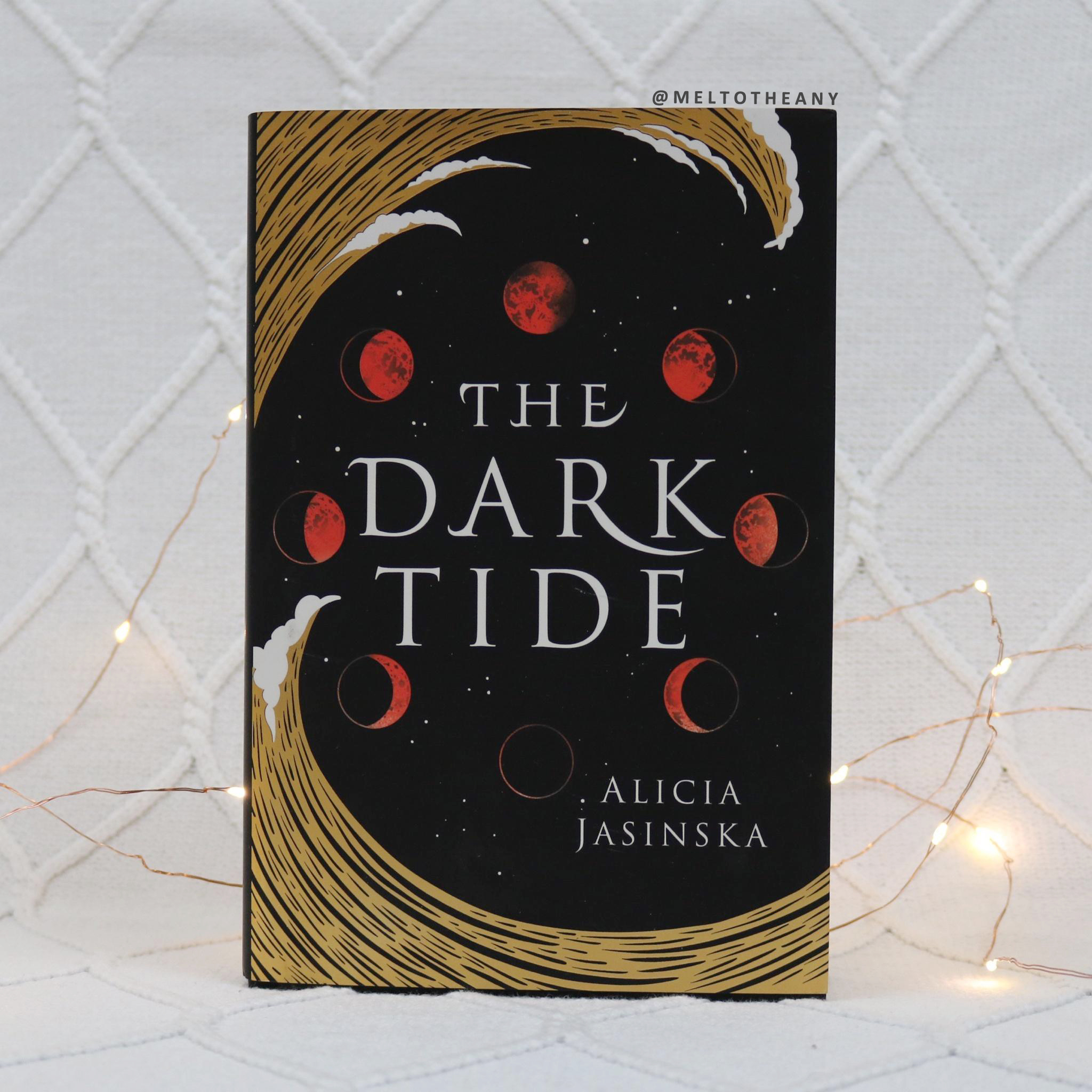 (This was such a thoughtful birthday gift from Pamela!)

“Witches. Murderers. Queens who chained boys to stone pillars and drowned them on full-moon nights.”

The Dark Tide centers on an island that relies on a yearly human sacrifice by the witch queen who must fall in love to protect them, except the last few sacrifices haven’t worked because the wrong hearts were broken and now the island cannot stay afloat. Once a year, the witches come and give magic to the island town mortals if they are able to impress them, and if they are brave enough to leave their homes while the witch queen seeks a new sacrifice. Yet, the boy who was the one to disrupt the spell that was saving them all gets picked again, but there is a girl who is unable to let his life be at risk again.

➽ Eva – The new witch queen, who can’t seem to feel anything since her sister passed away. Yet she must pick a new sacrifice for St. Walpurga’s Eve, and when she sees Thomas Lin, the only boy to ever escape his sacrifice, she knows that she must pick him.

➽ Lina – Left her home to search for her brother, Finley (who left their home to try to get a healing spell for her), but when she sees Thomas get picked, she and Finley go to try to retrieve him.

“There was a deep and ravenous hunger inside of her. Sometimes she wasn’t sure if she wanted to kiss him or eat him whole.”

But when they get to the Water Palace (which is truly the coolest palace of all palaces), Lina realizes that a life must be sacrificed, she offers Eva her own life in exchange for Thomas’, which Eva accepts. And in the days leading up to the drowning, Lina does everything to think of another way, while her and Eva get closer and closer. And stakes get much higher because we know that Eva must fall in love with Lina for the protective magic of the sacrifice to work.

As for the sexual representation, I’m not sure if it is ever stated that Eva only likes women (or if the author has said something somewhere) but I’ve seen many reviewers say she is a lesbian! Lina is on page attracted to multiple genders, but a label (like pan or bi) is never used. Regardless, this is very, very beautifully sapphic and my gay heart was very, very full. As for other representations, there are PoC side characters, and I think Lina could also have OCD but it is never stated on page again.

This book very much talks about grief and loss and how those feelings can take over every aspect of your life when you lose someone you didn’t think you could live without. This book also talks about how you are allowed to feel everything, even anger, while grieving, because sometimes life will just never be fair. There is also a good discussion on how you can love someone so much that you would sacrifice everything for them, even if they have treated you badly in the past.

“Do not let anyone make you feel like you owe them forgiveness. Not even family.”

Yet, this is ultimately why I gave this book four stars. I feel like Lina’s past with Finley was never addressed for more than that little talk of how his anger has scarred her for a lot of her life and how it even was the reason her ankle was hurt. There is a beautiful talk about how family members are not worthy of your forgiveness just because they are your family, but I feel like nothing came of this very important subplot about abuse. Especially since Lina and Eva both kind of bond over them both having someone taking advantage of them and their kindness, yet Eva’s gets a full narrative arc.

“You can have the city or the person you love, but you cannot have both.”

Overall, I really enjoyed this so much. The atmosphere was truly decadent, from this sleepy little island, to the witches bonfires when they visit the town once a year, to the palace and all the hidden rooms and magic, I could never get enough of any of the settings in this book. The premise of a witch being forced to sacrifice a new love once a year to save their home was heartbreakingly beautiful. The talk of hard sibling relationships and what people are willing to do for the people they love had me completely hooked. The writing in general was so lyrical and beautiful and left me speechless (and with way less page tabs)! The romance (and first kiss, holy shit) between Lina and Eva was amazing, I only wish we could have gotten even more of it. This book just had so many keywords and themes that worked for me and I truly had an amazing time while turning every page. Oh, this book also has a really cute sea monster who loves dance, and it made my heart very happy, too.

Trigger and Content Warnings: loss of a loved one, human sacrifices, drowning, self-harm for blood for spells, blood depictions, violence, magical compulsion, grief depiction, brief mentions of abuse, and I felt like there was a lot of talk of drinking alcohol throughout this book, so please use caution if that could be a trigger for you.

13 thoughts on “The Dark Tide by Alicia Jasinska”