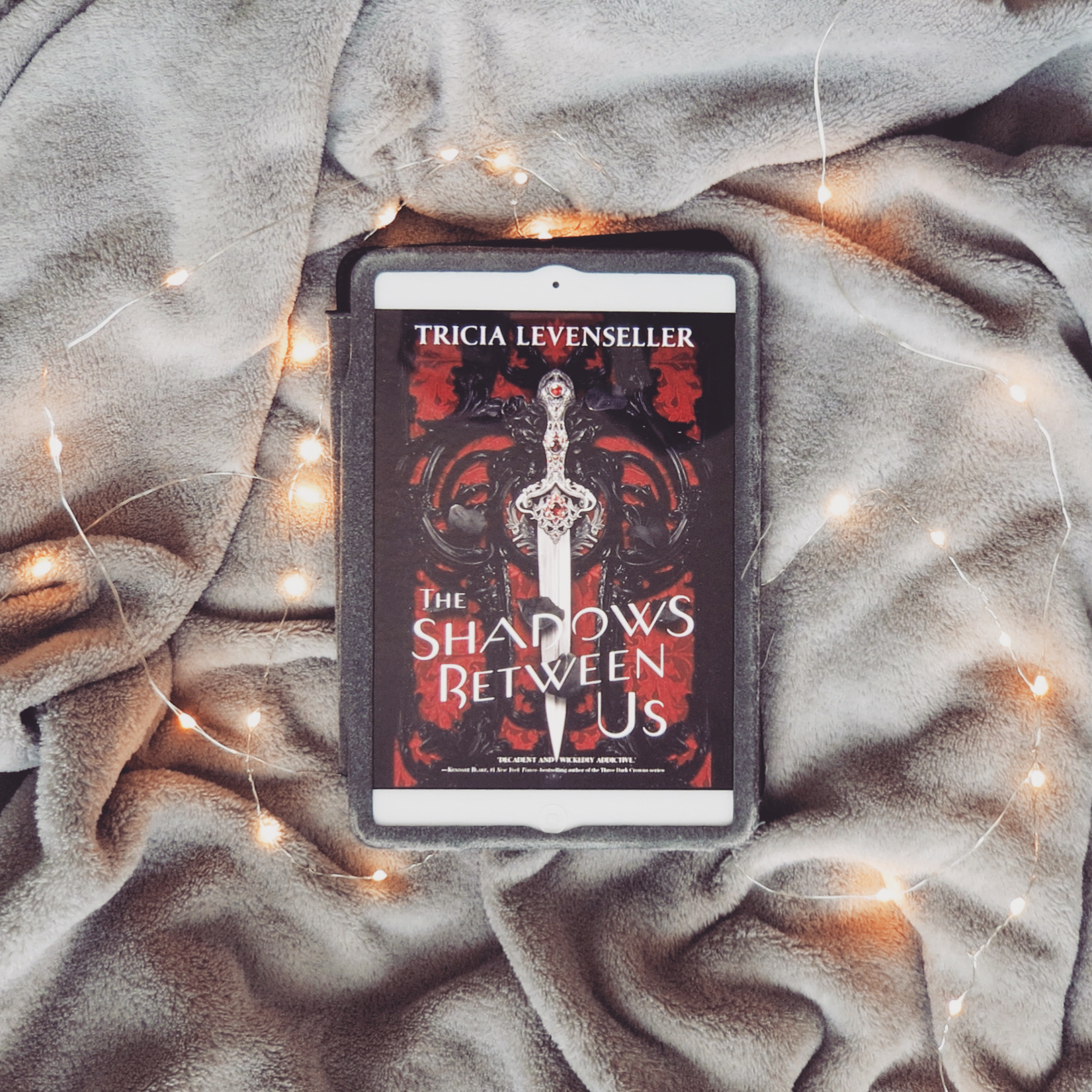 The Shadows Between Us was such a delightful reading experiences and one of the best YA romances I have read in a while. This author clearly wrote this book with the intention to focus on the characters and their relationship and it paid off well.

In this novel we follow Alessandra, who is planning to woo the Shadow King so she can kill him and become the ruler of the kingdom herself. Not knowing the extent of his powers and what exactly the mysterious shadows around him do, she starts her scheme to get close to him, so she can become queen and learn all his secrets. But as she spends more time at his court, she realized it won’t be easy to win over the Shadow King without risking developing some feelings herself.

I went into this book without knowing much about it. Mostly I was interested in it because I really enjoyed Tricia Levenseller’s Daughter of the Pirate King duology and knew I wanted to read more work from this author. I liked the basic premise and thought the main character sounded really interesting and I was not disappointed in the slightest.

“But now everything is different, and I want so much more. At the same time, I’m terrified of having more and so glad he cannot touch me, that he will never hurt me because we will never be allowed to get that close.”

The main character was truly amazing and while she went through a lot of character development within this novel and developed feelings for the king too, she stayed true to her villainous nature. I loved seeing a character like her discover more about herself and really growing as a person while not changing who she is at her core.

The author also put an emphasis on how it’s okay to have sex with people without being emotionally attached to them or have romantic feelings. This character had casual sex with several partners and she was not ashamed of enjoying it and I think that is incredibly important representation in YA and we do not get it enough.
I just really enjoyed the all-around sex positivity but also emphasis on not being influenced by society’s views to DO have sex in this book!

“Waiting. Not Waiting. One lover. A hundred lovers. There should be no judgement either way. A woman is not defined by what she does or doesn’t do in the bedroom.”

I also very much enjoyed the love interest and thought his character development was incredibly well done. Because this book puts a lot of focus on the character and their relationships, it all felt very believable and well fleshed out and I felt super invested in the relationship between Alessandra and the Shadow King.

I especially loved seeing the way these two characters learn from and inspire each other. They start admiring each other just for the person that they are but they also both grow and learn by being in each other’s company and because they want to make their relationship work despite a lot of obstacles in their way.

The aspect that was probably lacking the most in this novel was the world building. We don’t really get much of that at all and there is never really an explanation of the King’s shadows. We don’t know what exactly they are, where they came from or just how they fit into the context of this world.

For me, personally, this was not really an aspect that bothered me, as I enjoyed the characters and relationship so very much and was happy that we got a well fleshed-out romantic storyline. But I will say that if world building and understanding all aspects of it is really important to you, this book might not be for you.

As far as the general plot goes, I really enjoyed it overall and thought the whole mystery in this book was intriguing enough. Again though, this is not the aspect that made the book for me and also not the aspect I would sell this book with.

“I think that when you care enough for someone, you reach a point where it’s far more painful not to have him at all than to have him and risk losing him. You realize the risk is worth it. Because happiness, however short-lived, is always worth it.”

Overall, this book really shines because of its focus on the characters and really giving the main relationship time to develop. If you enjoy YA Fantasy with a big emphasis on the romantic storyline and want to read a truly well done take on the enemies to friends to lovers trope, I would absolutely recommend this.