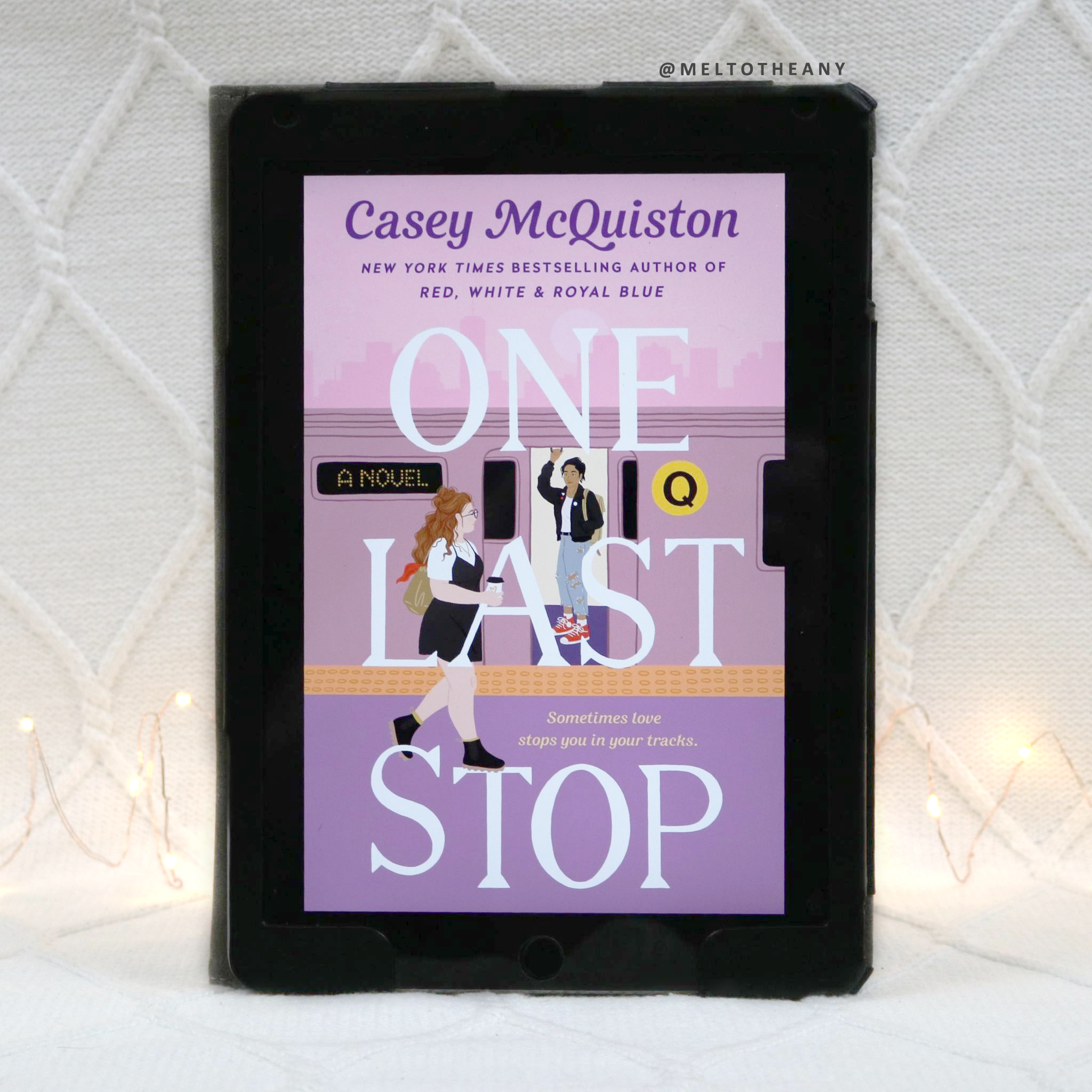 “August doesn’t believe in most things, but it’s hard to argue that Jane wasn’t put on the Q to fuck up her whole life.”

Red, White & Royal Blue was one of my favorite books of 2019. I was able to get a very early ARC of it, and I fell so deeply in love with this alternate reality I so desperately wanted to live in as a queer biracial with a hopeless romantic heart. Casey’s prose, characters, romance, banter, and (obviously) themes were everything to me, and I knew that they would take the book world by storm with their expectation-shattering debut. But then when they announced their next book would be sapphic Kate & Leopold, with an Asian love interest? Be still, my entire heart and soul. So when I tell you that I ignored every single ARC I needed to read and review before this one for the next eight months, I say that with my whole chest because there was no way I could stop myself once it hit my kindle.

One Last Stop is a story about a twenty-three-year-old bi girl named August who has moved from university to university, state to state, looking for a place that will feel like a home she has never known. Her whole life, her mother has expected her to assist in solving a missing person case from the 70s, but August just wants to find herself, her own way, and wants to feel like she finally belongs somewhere. At the start of this story, she has made it to New York where is she going to finish her degree, and thanks to a questionably placed looking-for-roommates advertisement in a Popeyes she starts to feel like maybe she could eventually call this city and these roommates home.

The Roommates:
➽ Niko – trans Latino psychic (good) bartender (not so good)
➽ Myla – queer Black electrical engineer turned artist (has an adoptive Chinese mom, who really added to the story so beautifully to me, so I am mentioning it here too!)
➽ Wes – queer Jewish tattoo artist

Oh, and I am fully in love with all three of them and the found family depicted in this book is so heartwarmingly perfect, I promise you! There are even more side characters who will easily steal your heart, too, and there is also a big emphasis on New York’s drag scene, and how queer people of color are still paving the way in 2020. This book has a very diverse cast, and we see so many different cultures, sexualities, genders, religions, and more. (There is for sure bigger body representation with August, but I’m not sure that I would say it is fat representation. I will edit this and quote an ownvoices reviewer mutual once they read and review! Also, it is brought up a couple times that August’s mom conceived her via in vitro fertilization, and I just feel like we don’t really get to see that a lot in books and I really loved that too!)

But on August’s very first day’s commute to school, where she takes the Q train subway line, she is having a bit of bad luck and an exceptionally large coffee stain. But all that luck seems to change right before her very eyes, when she meets a girl who gives August her red scarf without hesitation. She can’t stop thinking about the girl who saved her bad day, and the low chances of her being at that exact spot when she needed someone in a city that is so busy second meetings never happen, especially on the subway. That is, until she sees the girl again, and again, and starts to realize that she not only is on the Q every time August is on it, but in the exact same train car.

Oh Jane, where do I even begin? Jane is a Chinese lesbian who is displaced from the 70s in some kind of magical timeslip, where she can’t remember much of anything about her past, only what she carries in her bookbag. That is, until Jane seems to be the only person who helps her remember, while also being the only person she can’t seem to forget. Oh, and come the Mid-Year Freak Out Tag? Every sapphic in the book community with have Jane Su as their fictional crush. On God and on everything else. When I tell you Casey McQuistion wrote most everyone’s sapphic dream, I say it honestly.

But basically, since August has been taught her whole life how to solve missing persons cases, and because she is very gay and can’t stop thinking about the incredibly swoon worthy girl on the train, she decides to do whatever it takes to help not only figure out Jane’s past, but to try to rescue her from the subway she is tethered to. Even if helping her means lots and lots of kissing, maybe especially so actually.

“It’s probably going to break my heart, and it’s still worth it.”

The romance in this book? A tier above. I feel like One Last Stop gave a new definition to the word “yearning” if you want my very honest opinion. Truly, this is the type of book that will make even the most cynical of readers believe in love. The emotions (and tears) it was able to evoke from me was nothing short of astounding. And now I will be forever longing for someone to have a notebook filled with me. Like, this book is truly so goddamn romantic, and the one-liners left me utterly gasping and fully quaking.

“but none of those girls were you.”

On top of the fact that the sex scenes were probably the best I’ve read in any f/f book in my entire life. The range of sexual acts, the different kinds of sex that queer people are extra blessed to have if they want to have sex, the learning of your partner’s wants and needs and body in general; it was all just so perfect, so sexy, and so realistic. And this book was so sex positive, especially when you are in your early twenties and learning what you want and like! Also, there was a very important (and seamlessly woven in) discussion on virginity and how the concept is truly something of dated myth, especially in queer communities.

“She read about San Francisco, about the movements happening there, about Asian lesbians riding on the backs of cable cars just to show the city they existed”

Casey McQuiston constantly pays homage to the lgbtqiap+ community (especially queer people of color) who came before us, who paved the way, and who are the reason that we in present day have so many more rights and freedoms. And they do not shy away from talking about the costs so many paid with heartbreaking loss.

The UpStairs Lounge fire happened in the 1973 and was the largest gay mass murder prior to the Pulse shooting in 2016. The Stonewall riots in 1969, where people refused to be silenced and erased by the police or anyone else, and in return gave us some many civil rights advances. To HIV and AIDS activists who had to live during the Carter and Reagan administrations who not only encouraged hate with racism and homophobia, but who heartlessly let so many die, while also eventually administrated drugs that would lead to toxic overdoses, simultaneously promising a vaccine that would never come. Victims had to wait until 2003 for baseline adequate help after so many had already been lost because of the virus.

There are so many challenges still with being unapologetically who you are in present day, but it is so important to honor and remember all of the lgbtqiap+ activists (again, especially the people of color) who came before us and made what we do have today possible. And Casey McQuiston truly keeps that at the forefront and makes it the heart of this story.

And surrounding yourself with people who see you, amplify you, support you, celebrate you, and love you unconditionally and unapologetically is so important, too. I think it’s always really important to mention that even though Casey honors the past, they filled me with so much hope for the future, and for future generations of marginalized voices who will more easily be amplified, more easily be heard, and so much more easily be seen.

Friendly reminder, if you haven’t found a place that feels like home yet, or the people who uncondiontally love and respect you, I promise you will and I promise are never alone in the meantime. Putting yourself and your safety first will always be the most important thing in all the different stages of life. And just know I see you, and I’m proud of you, and I’m cheering for you, always. But if you ever need extra help The Trevor Project and PFLAG can be wonderful recourses.

Overall, this book just meant so much to me, and I know it is going to mean so much to so many. 2020 has been so hard, so fucking hard, on so many, and this book was the 2020 escapism that I want to fold myself into forever. I haven’t left my home’s property in eight months, but with One Last Stop I got to feel whole and happy and seen on a New York subway, while watching two girls fall in love and carve out the lives that they want, unapologetically. Truly, this book made me even more proud to be a queer Asian, I only wish I was half as cool as Jane Su.

“you’re the first thing I’ve believed in since—since I don’t even remember, okay, you’re—you’re movies and destiny and every stupid, impossible thing, and it’s not because of the fucking train, it’s because of you.”

Oh, and this will probably be my favorite 2021 publication. Happy reading!

12 thoughts on “One Last Stop by Casey McQuiston | ARC Review”