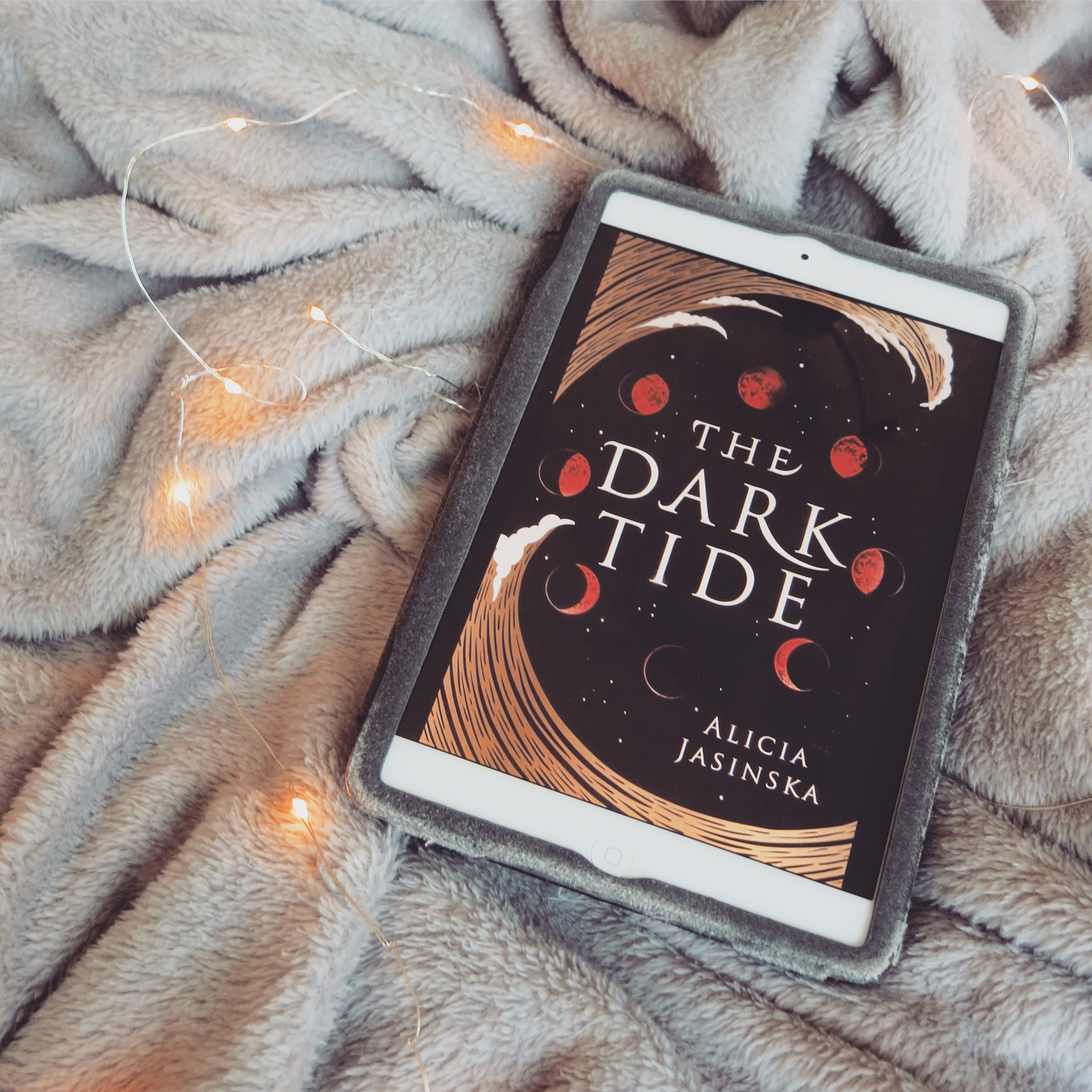 “A queen should answer to no one. Not the heavens, not the earth, not the sea. Especially not to something so temperamental as the tide.”

The Dark Tide is a novel that drew me in with its incredible world building and intriguing magic system but ultimately lost me when it comes to the plot.

This novel is about Lina, who fears that her brother will be the boy chosen to be the witch queen’s sacrifice to save the island this year. In order to protect him, she gets help from the boy she loves, Thomas, but then he ends up being chosen as the sacrifice.
Lina feels like it is her fault that Thomas got chosen and offers herself as a sacrifice in exchange for Thomas’s freedom, thinking she can find another way to appease the island.

And so we follow Lina on her journey of finding out more about the sacrifices and we also get to see the point of view of Eva, the current witch queen, mourning her sister, the witch queen before her, who sacrificed herself in the year prior in order to save the boy she loved.

“I’m not going to be made to feel bad for saving someone’s life. No matter how afraid I am now, I would still make the same choice. I’d rather die knowing I saved the person I loved than live knowing I abandoned them to save myself. But that doesn’t mean that I want to die.”

The atmosphere of this book is so amazing. I truly feel like it has been a really long time since I have last read a book with an atmosphere that I truly felt so captivated by. I very much found myself being able to envision all the places that I read about so very well and constantly wanting to know more about the history of the island and sacrifices.

The magic system was something that I was very much fascinated by, especially the fact that there is magic that the islanders can buy in the form of potions from the witches. Because this was an aspect that I enjoyed so much, I really wish this would’ve been explored even more because I truly couldn’t get enough of the possibilities of the magic that both the witches themselves were able to cast, but also the islanders through them.

“People claimed witches were nightmares, dreams, but Eva felt they were closer to plants; wild magic grew inside of each of them, waiting to be harvested in the strands of their hair, their salt tears, their spit and blood.”

I thought that the relationship between the witches and the islanders in general was a really intriguing and unique aspect. The Witch Queen is obviously not immensely popular with the islanders because she sacrifices a boy every year but they are grateful too cause they know they share the same interest too, which is to protect the island. While the main focus of this story is the conflict of the sacrifice, it was interesting to see that the witches and islanders actually live in peace, having a common enemy in the mainlanders.

“A witch’s house reflected those who dwelled within it. It was a mirror held up to their souls. Eva decided her soul must be a very black and twisted thing, because she missed the cold silence, the dark and its merciful shadows.

I also loved reading about Lina being a dancer, especially with her being injured and how that affects her. I have read a couple of Contemporary books focused on dance but it was really special to read about a dancer in a Fantasy setting and I don’t think I’ve ever had that experience before.

I very much related to Lina’s experience and could recognize myself in her thoughts and feelings about dance itself and about how it is so hard to recover from an injury when you have learned for years and years to constantly push yourself and you barely know what it is like to take a break. This was an aspect of this book that stood out to me specifically and that I feel very fond of.

“How strangely good it had felt, though. To leap. To spin. To sway. To dance as death stared her down. How alive she had felt in that moment. She’d held a monster captive with the turn of her body, the stamp of her heel on deck. A different kind of magic than the one Eva wielded, maybe, but magic all the same.”

I enjoyed reading from both the characters perspectives very much and I thought that it was very smart to include both POVs.
But I wanted so much more from the relationship between the two, especially as they had some really, really strong scenes. Their chemistry was through the roof and I loved the banter between them but ultimately I still didn’t really find myself invested in their relationship whatsoever, which was honestly the aspect that let me down the most.

And maybe I could blame this on my expectations too. I think I just went into this novel, thinking it would focus much more on the romantic relationship, when it actually more so focused on both main character’s family relationships. And that is an aspect that I do really love reading about but I just feel like the romantic storyline fell a little bit flat in comparison to that.
Now, I am not sure if there is going to be a sequel to this book but I read it thinking it was going to be a standalone and with that in mind, I just wanted more of Lina and Eva’s relationship.

I did love the casual queerness of this book, with obviously both of the main characters being queer (with Lina stating multiple gender attraction), but also Lina having two mums and there being a trans side-character.

“And something inside of her broke free, the lock wrenched off a door she hadn’t known existed, endless possibilities spilling over. Why hadn’t she ever thought of this? She was the rain—transformed. Floating and burning and falling, falling, falling.”

But in general I felt that, especially because I had been so intrigued by so many of the aspects in this story, I was extra disappointed by the overall plot of the book but especially the last 30% of it, as the ending felt quite rushed too.
As we were finally getting to a point in the last third that I felt like the plot was truly picking up, the scene was very abruptly cut off and we basically hit the epilogue section of this book. It just all felt almost anticlimactic to me.

And then there is Lina’s relationship with her brother, which needed so much more exploration on page. This is truly an aspect that I do not even know where to start unpacking because it is really complex but I just feel like this was not talked about enough at the end of this book. Lina has several conflicts with her brother and he is always described as someone with a temper, to the point where him getting mad was the reason that Lina’s ankle got injured. And Lina often describes being scared of her brother or how he might react to certain things.

“Every muscle in her body had braced instinctively at the first sign of his temper rising. She wondered if it would always be this way between them now. As if it wasn’t just her ankle that had broken, but something else, something irreparable.”

This relationship very much reads like an abusive one and I do not think that this aspect was explored enough in detail. It is one thing for Lina, as a character, to think that her brother’s behaviour is okay, because she knows that he loves her and she loves him and that he means no harm and it’s “just the way he is”. That is definitely behaviour that would be absolutely normal to obverse in a victim of abuse.

But it is never made clear to the reader, that this is very much not okay behaviour. And while many readers will still be able to see those aspects, I do not think abuse like this (especially in YA) should be something to be left so openly and to be interpreted by the reader.
I just really wish there had been some repercussions for the way Lina’s brother behaves.

“Lina liked to imagine she would be like that: fearless when it mattered most, unbreakable when it came to protecting the person she loved.”

Overall, I just wanted so much more from this novel. There are lots of aspects that I enjoyed and appreciated but ultimately I felt more so disappointed by this book because I felt like it couldn’t live up to its potential and tried to unpack too many aspects at once.

2 thoughts on “The Dark Tide by Alicia Jasinska | Drumsofautumn Review”