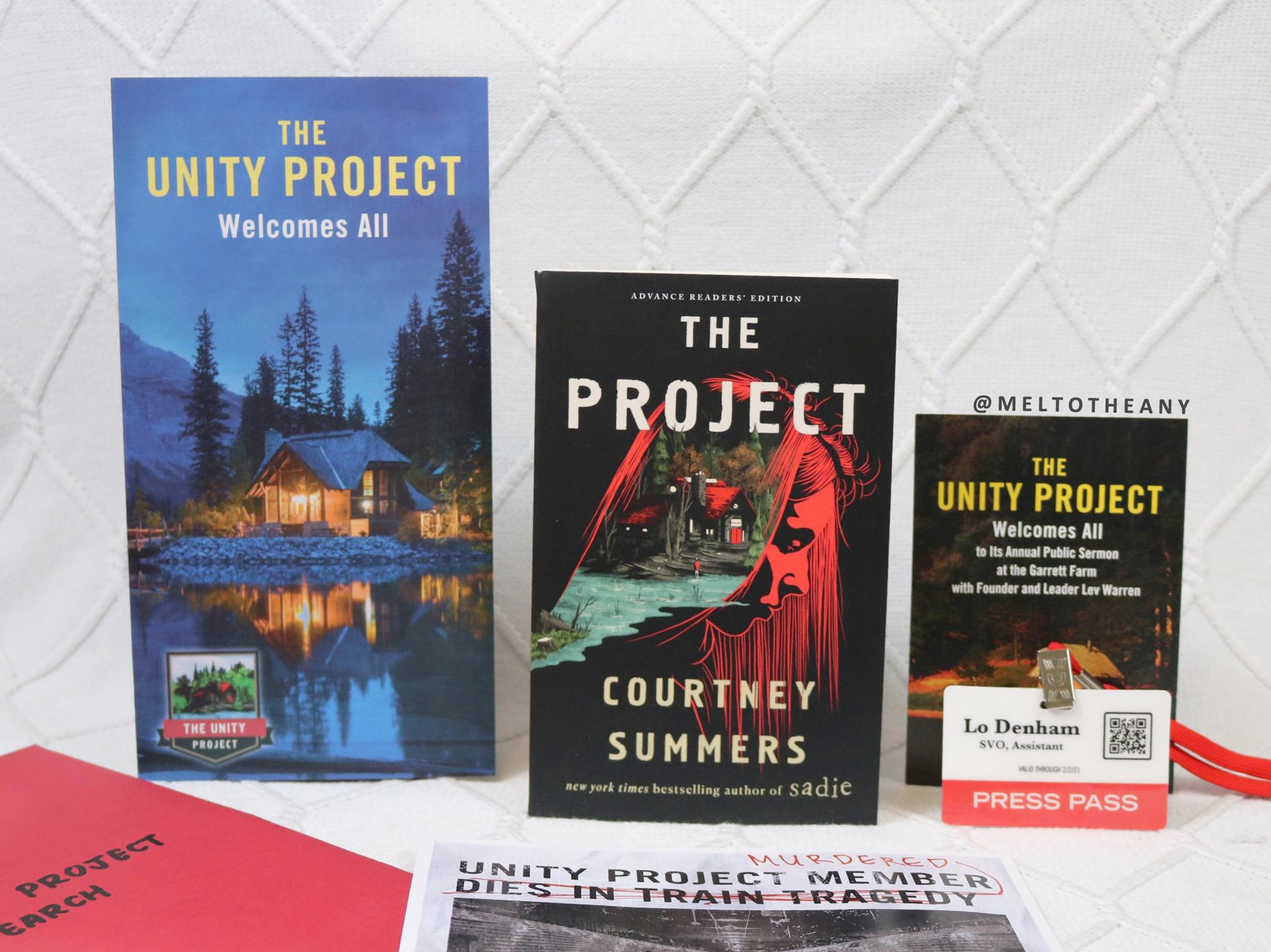 ARC provided by Wednesday Books
✨ My Review for SADIE

Courtney Summers is an author who has always meant a lot to me and her stories always impact me more than I have words to write in a review. I truly believe no other author writes about the sibling experience and feelings that I personally have better than her, even though I always am left feeling grateful and thankful that I am not a main protagonist in her stories. And The Project is no different; it is hard hitting, filled with twists and turns that make you constantly question what is real, it is lyrically written, emotional, and fully a heart-wrenching story about the things you are willing to do for someone you unconditionally love, even when you feel isolated and confused and so very scared. Oh, and it’s about cults and how they prey on people who are isolated and confused and so very scared, too.

Lo was only thirteen-years-old she was in a car accident that left her parents dead and with everyone believing that she wouldn’t be alive much longer. Bea was only nineteen-years-old when she watched her world fall apart when she walked into the hospital to maybe say goodbye to her little sister. Desperate for hope that Bea wouldn’t lose Lo too, she went looking for something to believe in inside the hospital, and found Lev Warren. And when Lo ends up making a huge leap to recovery that very night, Bea realizes there is nothing she wouldn’t pay to ensure her sister will live.

“Bea closes her eyes. She wants Lo to understand that night in the hospital, what was supposed to be Lo’s last night on earth. How it brought Bea to her knees and how it split her heart in half and how its breaking called forth a miracle.”

Six years later, Lo is alone again and hasn’t spoken to Bea in many years. She feels hurt and abandoned and just misses her sister so much, and she directs all that pain in to the Unity Project, that Lev Warren runs and where Bea is a member. And then one morning, Lo’s world gets touched again by the Unity Project when she witnesses someone take their own life, but before they do they recognize her because of Bea. And this death touches even closer when it impacts her job, and she gets the opportunity to finally do a story for the magazine she is working for. And she decides she will finally contact her sister again and make her see the corruptness of the Unity Project, and she won’t let anyone stop her, especially Lev Warren.

“All I wanted was to claw my way back to my sister, but the whole time she was surrounded by new love, she buried her old family and built a new one on top of its bones.”

This story is mostly told in Lo’s perspective, but we get little glimpses of Bea’s throughout and every time I could feel my stomach and heart just drop lower and lower. The things that both of these sisters were willing to do for one another renders me utterly speechless. Truly, I feel like no one can write vulnerability and sacrifice, unconditional sibling love, earth-shattering desperation, and pure heartbreaking hope like Courtney Summers. All while also making her characters feel so real, and their journeys feel like you are right beside them experiencing everything alongside them. Yet, also make you question everything at every twist and turn.

Lev is written in a way that is scarier than any monster in any fantasy book, because monsters like him are living and dwelling and thriving in our world today. They prey upon people who are isolated from their families, people from lower incomes, people who are unable to get help from broken American health care systems, people who very rarely will realize that what they are experiencing is manipulation, gaslighting, and abuse. And if they are able to realize it, they are unable to seek help because men like Lev are gaining more and more power, more and more followers, and more and more resources to keep you trapped every single day. This is a hard book, and it is so very dark at times. The range in which Lev is able to manipulate people into believing his cult is a community is actually harrowing. And seeing Lev lead people into believing that he is a vessel for God, chosen to do His wants, is truly some of the scariest literature I’ve ever read and it really will leave me feeling haunted forever.

“The hard part is this: the small broken girl inside me clawing against the wall I’ve built to keep us separated. The one who still wants so much for certain things, despite all she knows.”

Overall, I really did love this and I very much believe Courtney Summers was born to write and impact so many people with their stories. Her way of crafting and telling stories leaves me in awe, and I’m always completely blown away reading all her last lines. The reason I am giving it four stars is because I didn’t love the ending. I mean, this wouldn’t be a Courtney Summers’ book without a bit of a mysterious ending, but this one was just a little too mysterious for me and left the book at a little bit of a weird note when you look back at everything that was endured. But the last line? Perfection. Speechless. Masterpiece. Everything. Courtney Summers and her stories truly are something special and I’ll carry them within my heart always, despite how heavy they are.

Content and Trigger Warnings: abandonment, loss of loved ones, sleep paralysis, grief, depression, panic attacks, hospitalization, talk of death of child in past, physical abuse, torture, emotional abuse, manipulation, gaslighting, blood depiction, complications with childbirth, murder, child abuse, captivity, and cults. Please use caution and make sure you are in the right head space for this book, because a lot of these triggers are themes that are brought up a lot and unapologetically. Stay safe, friends!

6 thoughts on “The Project by Courtney Summers | ARC Review”