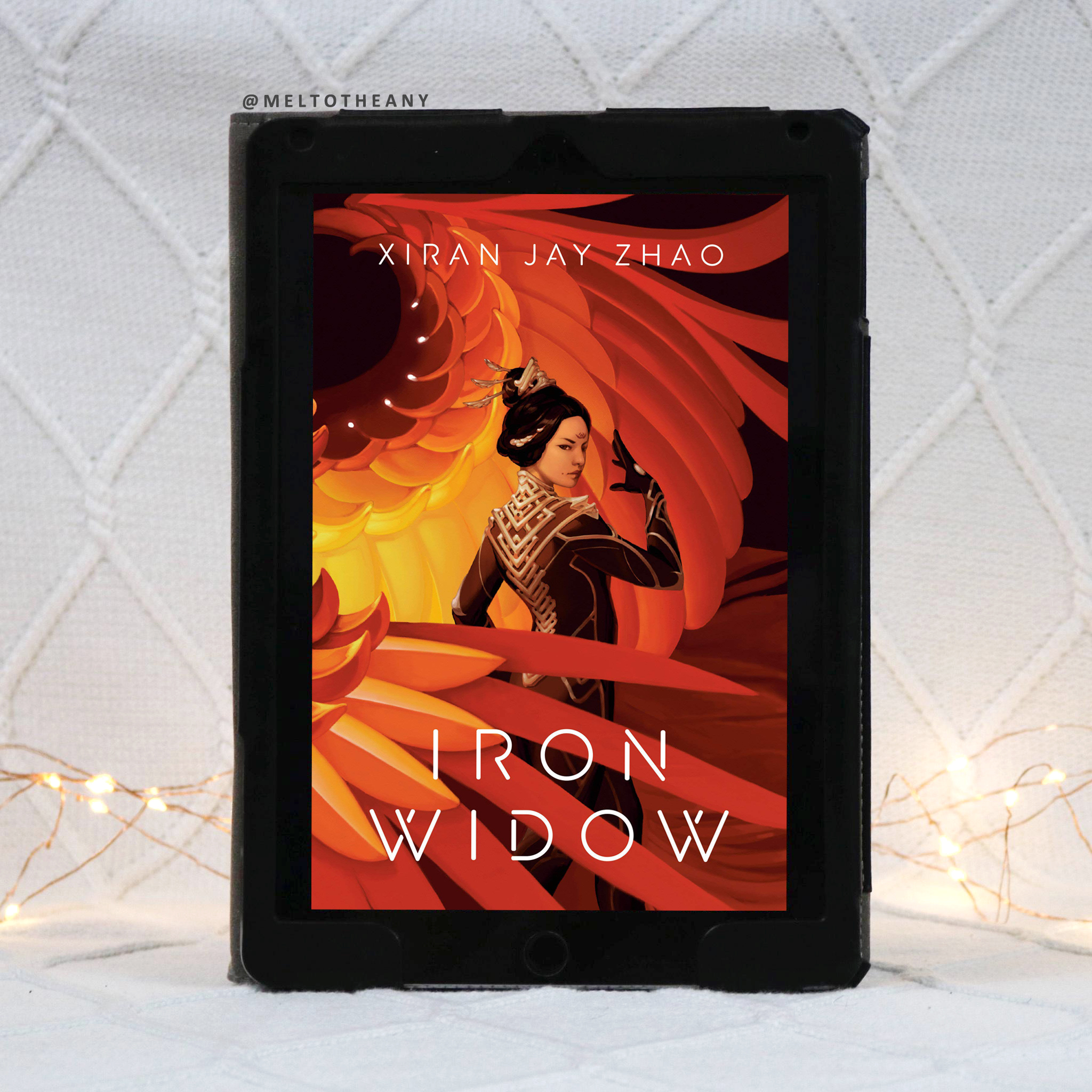 “This world does not deserve my respect. It is not worthy of my kindness or compassion.”

I’ll be completely honest, when I read the author note at the start of this book I knew I was about to fall in love with a new story. Xiran Jay Zhao lets the reader know that you are about to get a love letter to Chinese culture, Chinese history, and the only female Chinese emperor! The author does not shy away from the ugly things, but always shines such a powerful light on all the beauty, and truly crafts such an inspiring tale of a girl who will rise up the ranks and become more powerful than anyone ever let her believe or dream, including her family, her country, and even herself.

This story is Asian, queer, and all about abolishing the patriarchy and gender roles that every society tries to make people fit with their judgement, expectations, and laws. “Pacific Rim meets The Handmaid’s Tale in a polyamorous reimagining of China’s only female emperor” is the perfect tagline for this book! And this story is truly so powerful, so beautiful, and so high on my recommendations lists for you all!

Okay, on to the giant transforming robots and what the story is actually about! In this world, Huaxia is trying to protect the Great Wall against Hunduns and their alien mechs (who have already developed and established their own society and way of life on the other side of the wall And Huazia has modified versions of these robots that they call Chrysalises, and constant waves of battle are happening and being broadcasted for the people to watch and be entertained by. The pilots of these mechs are able to transform them into East Asian mythical creatures, and sometimes they are able to gain more special abilities under very specific circumstances when two pilots are able to bond together, weave their qi together, fight stronger together, and have a big adventure in battles together. But there are so few bonded pilots in this world.

But in Huaxia, young boys are hailed as heroes for piloting these machines, but it always takes two pilots, no matter how much society wishes to forget about the evils of the other seat. Young girls are given up by their families to serve the army and have their qi tested to see if they would be able to help pilot alongside a powerful boy. The thing is, most times the boy completely invades, using a psychic link, and uses up every ounce of lifeforce the girl has, killing her during battle.

“I wouldn’t live and suffer for anyone else, but I would die to avenge my sister.”

➽ Wu Zetian – our main character, who is ready to enlist herself in to the army, to the same pilot who her big sister was enlisted to, but only her ashes were given back. On a mission of pure vengeance, and being sick of being held back because of the gender she was assigned at birth, she finally wants to reclaim some semblance of power for her sister, even if she has to pay for it with her life. But when she gets into her first mech as a concubine-pilot, the world is not ready for the power she truly has to offer, even if it could change the war for once and for all. She also uses a cane and sometimes a wheelchair because of the seriousness and pain of her footbinding.

➽ Li Shimin – the Iron Demon, pilot of the Vermillion Bird, and the scariest and most powerful pilots of them all. Not a single girl has made it out of his mech alive during battle. Was on actual death row for murder because his qi power was tested and noticed and now he is forced to endure another type of prison. He also is bisexual and half Rongdi. He is also struggling with alcoholism and immense trauma and grief. (unrelated, but I would give my life for him this very second.)

➽ Gao Yizhi – son of a powerful man who controls many of the social and public relations standards of Huaxia. Yizhi would sneak out and meet Zetian once a month in the forest of her village and help teach her things and just be a good friend to her. When I tell you I would die for this character. I also feel like the author really gave him some 11/10 one-liners. He is also bisexual and really does such a beautiful job teaching Zetian about polyamory. (yes, these three end up in a relationship together, even though it is not the central plot, it is perfect and I hope we are able to see more stories in the future normalize polyamorous relationships in the seamless way this one did!)

“love isn’t some scarce resource to battle over. Love can be infinite, as much as your heart can open.”

But we follow (and fall head over heels in love with) this trio, while they attempt to dismantle the patriarchy and different types of oppression these people have been facing since even before Zhou fell. I know I just gave you a lot of information, but I promise you the author does so much of a better job immersing you in this story and world. Their writing is actually the best writing I’ve read in the past few years and the amount of highlights my eARC has is actually sickening.

I also just deeply loved the themes of feminism and how sometimes things can feel exceptionally heavy when you have been raised your entire life to honor your elders and trust that they know best, when we still have so many systems (and corrupt governments) to dismantle in our world today. I’m typing this review in 2021 where you are still unable to get a divorce in the Philippines that isn’t an annulment, and how living in the US means constantly seeing powerful men make laws that take away women’s rights to their own bodies.

“I close my eyes, picturing myself taking command of a Chrysalis, towering over buildings and smashing the earth with my colossal limbs or luminous qi blasts. I could crush anyone who’s ever tried to crush me. I could free all the girls who’d love to run away.”

Overall this was just the Asian, queer, polyamorous, feminist sci-fi story of my dreams. The layers were so haunting and deep, the themes were so loud and important, the writing was pure perfection and genius levels of lyrical, and the characters were completely and wholeheartedly unforgettable. And I truly believe that book two, and the conclusion to this duology, will be even better come 2022.

Also, this author is just really cool and creates really amazing content on youtube and their blog. I truly think they are just so inspirational, and I believe one day they will have a few stories written about them and the hope and happiness they are giving to so many, including so many Asian kids all around the world who are feeling so seen and feeling even more pride in their cultures.

Also (lastly for real), this book being published on September 21st, the Mid-Autumn Festival in China, and celebrating another story about a woman, a rabbit, and their sacrifices brings actual tears to my eyes. Very galaxy brain of this author and pub house and just a really beautiful final touch.

Iron Window will for sure make my best books of 2021 list, and I am so truly proud and honored to have been on the blog tour for such a powerful story.

Xiran Jay Zhao is a first-gen immigrant from small-town China who was raised by the Internet​. A recent graduate of Vancouver’s Simon Fraser University, they wrote science fiction and fantasy while they probably should have been studying more about biochemical pathways. You can find them on Twitter for memes, Instagram for cosplays and fancy outfits, and YouTube for long videos about Chinese history and culture. Iron Widow is their first novel.