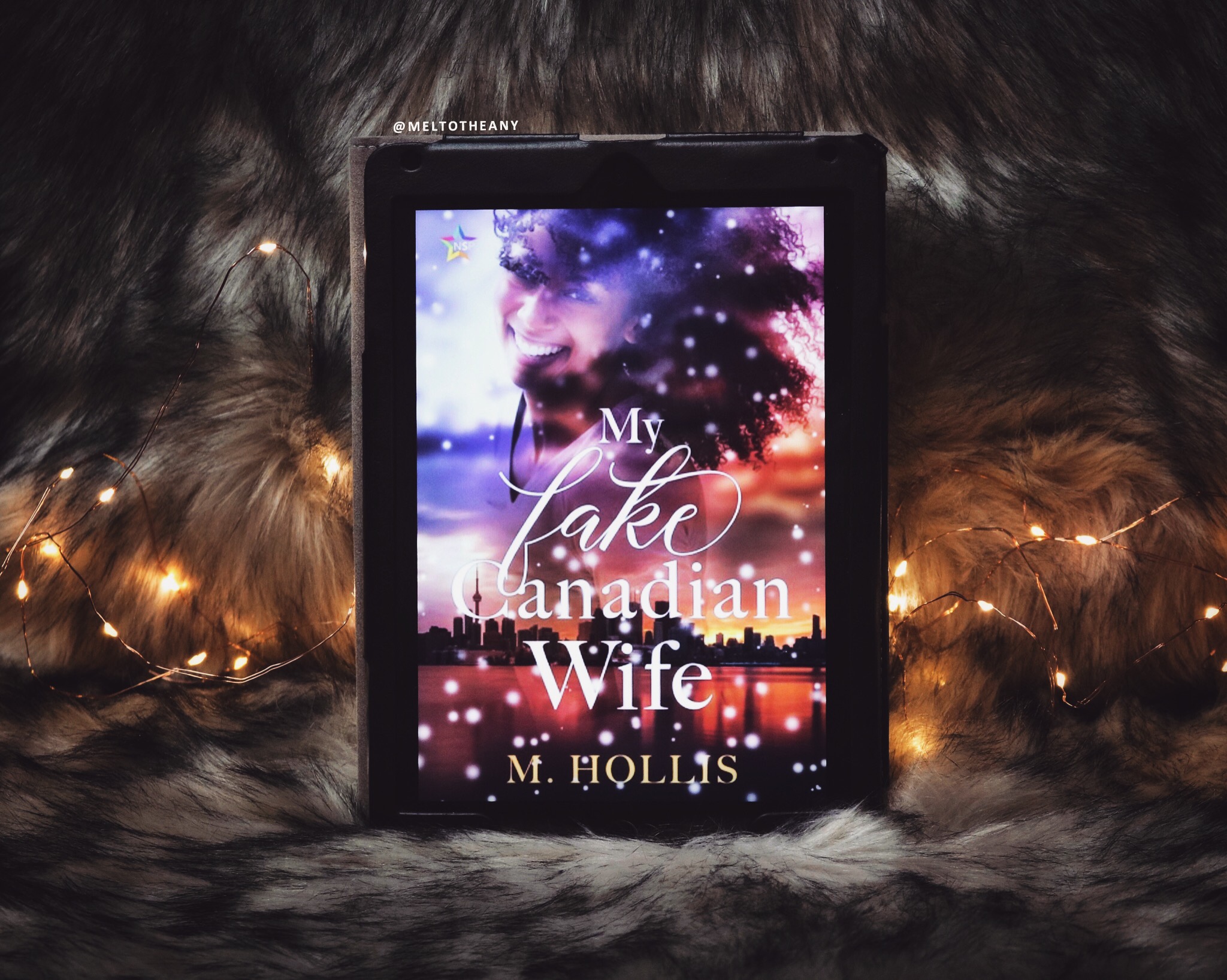 ARC provided by the author in exchange for an honest review.

Did I just start 2019 off with the cutest sapphic relationship set up, that also featured a pan love interest? Wow, the blessings for this new year already! Friends, I loved this. And if you’re looking for something diverse, something hella cute, something super romantic, and something that’s a really quick read, then look no further.

“Why was it so hard to find good mainstream media where you could see two girls falling in love with a happy ending? Even harder if I wanted to find stories with black girls. Brazilian black girls falling in love? Mostly, I’d only found them in indie and self-published books. Maybe it would be easier to enjoy more media if everything I tried to watch didn’t look as white as the walls of my apartment.”

My Fake Canadian Wife is an ownvoices story for the Brazilian and the queer representation. Our main character, Dora, is a lesbian and is an aspiring photographer from Brazil, who moved to Canada to go to school, and is still currently living there. Sadly, their camera broke so they are currently working as a barista at a local café trying to save up money. That is, until Dora receives a letter from immigration telling her that she hasn’t updated her student Visa and that she is going to be deported if the situation isn’t corrected.

Dora is feeling helpless, and unsure if she wants to move back with her family in Brazil, but a coworker introduces her to Abby, who is a librarian, pan, adorable, and totally willing to marry Dora to keep her in the country. But first, they have to see if they are both willing to commit to something like this, and they have to find out if they even like being around each other for long periods of time. And what better way than for Dora to spend Christmas and the holidays with Abby and her family? And they both learn a lot about themselves and the kind of relationship that they want and need.

Last year, I fell in love with The Melody of You and Me which starred a pan main character who fell for a Filipino girl, and at this point I think M. Hollis is writing stories specifically for me and my interests. Even though both of these stories are filled with very real and challenging situations, but are heartwarming, sapphic stories that just fill my body and soul with so much pure joy and happiness.

Overall, I just loved this and I really appreciate the stories that M. Hollis keeps writing. They always make me feel so seen, and I always have the biggest smile on my face while reading their stories. I’ll be the first to say that this story is a little predictable, but that didn’t make me love it any less. I hope 2019 is filled with f/f romances like this! And I hope M. Hollis never stops writing them, especially after reading the author acknowledgements because you can really tell they put a lot of themselves into this beautiful story and it really shines through.

Content and trigger warnings for talk of cancer and talk of the loss of a loved one. 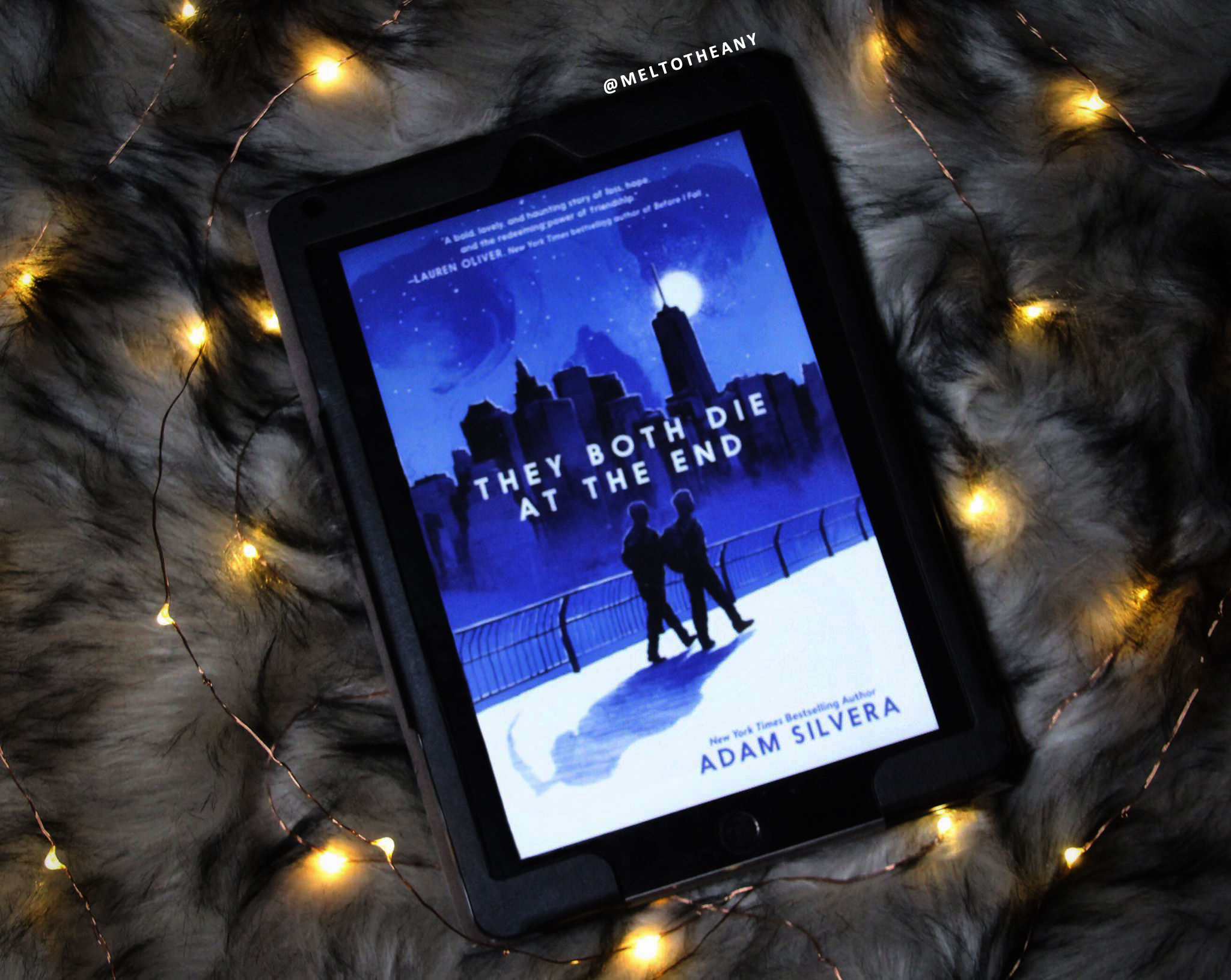 “You may be born into a family, but you walk into friendships. Some you’ll discover you should put behind you. Others are worth every risk.”

Hey, friends! I’m so sorry! I really wanted to love this, but this just wasn’t a book for me. I think some of the lines were so beautiful, and I love the overall message of living your life, every day, to the fullest, but I just could never connect with this story the way that I know so many of my friends have.

They Both Die at the End is a story about two boys, who live in a world where technology will let you know when you will die within twenty-four hours. And sadly, two boys just received the call that informed them. And throughout the book we get to see how their lives intertwine and come together for their last day.

Trigger and content warnings for loss of a parent, loss of a sibling, loss of a friend, depictions of grief and trauma, violence, abuse, talk of animal death, a terrorist attack/murder suicide, suicide attempt, talk of suicide, and a whole lot of talk about death.

“Death is inevitable for everyone and it’s absolute for me today.”

Things that may have been a factor of why I didn’t like this book:

➽ I don’t like “magic systems” that aren’t explained. I never have, and I never will. This reads exactly like a contemporary with one unknown fantasy element. Also, I think it’s kind of cruel that they don’t give people the option of not knowing. Even if medical staff always knew, I think that a person should be able to pick if they want to know when they are going to die. But yeah, I needed to know how or why they were able to predict these deaths. Even if the answer was “oh my gosh, an alien came down and gave us this machine” because even that would have been enough for me.

➽ I honestly hated the ending with Mateo. And, again, I just can’t suspend my disbelief enough that a boy that has been living his life in a paranoid state would do that. I just, I just can’t believe it. I know it is a beautiful message about how we all don’t know how we are going to die, and it could be something easy or something we would never expect. But, like, it just felt really unpleasant to read.

➽ I really didn’t like reading about how people use Death-Cast to try to hook up with people they know are dying, probably because then they don’t have to come out. I get that itthat would totally happen in our world, but it still made my stomach sick to think about. Especially towards super young adults like Mateo and Rufus.

➽ I do not read a lot of contemporary. But right before this book I read Radio Silence and Autoboyography, both of which I gave five glowing stars to. That would hurt any book that I had to read after them, and I feel so bad that TBDATE had to be that book.

➽ A booktuber did a vlog of them upset after reading because the title was real. Which, like, I’m probably being all kinds of petty, but the title was always most likely going to be real. But because of the way this book is told kind of questioning Death-Cast and seeing all the people it is impacting, I think I might have been hopeful and enjoyed this more, if I didn’t have it *spoiled* for me.

➽ The writing. Adam’s writing is lyrical, but also very fast paced. Even though I didn’t love this book, it never felt like a chore to read. And there were so many quotable lines throughout this novel.

➽ I also really liked the cute romance that started to brew between these boys. And I’m always here for LGBTQIAP romances! I loved that Mateo was gay and that Rufus was bisexual. I also loved that both boys were people of color; Rufus being Cuban-American and Mateo being Puerto Rican.

➽ I loved every scene with Mateo’s dad. Call me a masochist, what can I say? Those scenes were one of two that made me cry. (The other being with Rufus talked about what happened to his family.) And I am actually hard pressed to think of anything sadder than waking up and finding out your child is no longer with you. But these scenes were so beautiful and gave me all the feels in the world.

➽ I liked seeing the random people that were just living their day along side Mateo and Rufus. When I look back, I feel like it might have been a tiny bit pointless, but I still really enjoyed the glimpses and thought they were so unique. And it really helps enforce that everyone has so much going on inside them, and that you’ll never know what crosses a person is bearing merely by sitting next to them in a subway.

➽ The message about how we really should be living our lives to the fullest and try to not live it being scared to die. I feel really impacted by both of these themes. Probably TMI (like always), but my father had a really bad heart attack (STEMI) a few years ago where they didn’t think he was going to make it. I immediately flew home, and I still feel a little bad at how much of an uncontrollable, weeping, hot mess I was all through LAS, but he was awake by the time I landed in Flint. And I ended up taking off work and staying an entire month to help take care of him, just spend time with my dad and not take it for granted. And I will never forget how thankful I was, or that feeling, for the rest of my life. But I also developed really bad panic attacks and anxiety where I feel like I’m having a heart attack at least once a week, still, a few years later. I don’t even know what I’m trying to stay, other than I connected with both of these boys, the one thankful for even twenty-four more hours, and the one that is scared to leave his bedroom.

➽ And since I just told you all the worst moment of my life, I will tell you another story about why this book did resonate with me. I’ve played World of Warcraft for over a decade, and a friend that I raided with for many, many years knew that he was dying because of cancer. We all had a little guild celebration for him before he quit, and after he (in game) mailed us so many of his prized wow possessions and wrote very kind letters attached. His wife let us know via Facebook when he passed away, and it broke me so very hard. But I will cherish that letter for the rest of my life, and my Darkmoon Rabbit that I named Davien (after him)!

Damn, friends, I think I got way too personal with those last paragraphs. Why am I like this? But overall, I am sad I didn’t love my first Adam Silvera book! But I’m going to keep reading his work(s) and hopefully fall in love. Again, I truly do connect with his writing style, so I have high hopes. I also just feel bad that I didn’t love this beloved book of so many of my friends. Also, you should check out their reviews, because I love them and this book meant a lot to them: May, Courtney, Lilly, Emma, Em, Sana, & Elise! You all know I hate writing “negative” reviews! So, I hope you all check out their reviews and celebrate them! Happy reading, loves!

Buddy read with Courtney at Curly Book Owl, May at Forever and Everly, & Lily at Sprinkles of Dreams! ❤